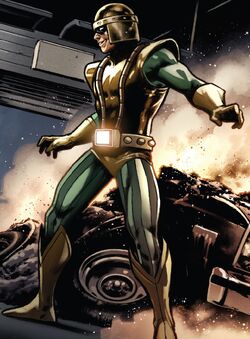 That ain't any Melter I ever met.

After Bruno Horgan was killed by Scourge, the gear he used as Melter was sold by the Hobgoblin to an unnamed criminal.[3] This new Melter was present during a battle between Hobgoblin's forces and the Goblin Nation. He, along with every other Hobgoblin franchise, joined Team Goblin when the Goblin King apparently killed Hobgoblin, though it was really Kingsley's butler, Claude.[3]

During the second superhuman civil war, the Melter tunneled his way into a diamond exchange vault. After managing to obtain a handful of diamonds, he accidentally git a gaspipe, causing a sinkhole. Despite injurying bystanders, the Melter survived, and the silkhole he triggered covered his tracks. Spider-Woman investigted the incident and managed to find the Melter in the bar the Quiet Room with help of a vision of the precognitive Inhuman Ulysses Cain. When the boast of his success erupted laughs in the rest of the patrons, the Quiet Room's owner, Black Bolt, had him kicked out. Outside the bar, the Melter was knocked out by Spider-Woman's ally the Porcupine and left to the authorities.[2]

When Tony Stark moved to a brownstone in the Lower East Side, the Melter broke into his garage and melted his car to antagonize him. Returning home from a hard day, Iron Man stumlbed into the Melter standing next to his car, and silently knocked him out with one punch. Due to the ongoing stress of his life, Stark took flight carrying the villain's unconscious body and tossed him from a high altitude, only catching him moments before he hit the ground.[4]

Seemingly those of Bruno Horgan.

Like this? Let us know!
Retrieved from "https://marvel.fandom.com/wiki/Melter_(Hobgoblin)_(Earth-616)?oldid=5799837"
Community content is available under CC-BY-SA unless otherwise noted.