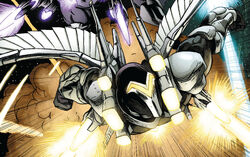 Mentor is from a race of super-intelligent beings, serving as a high-ranking member and strategist in the Imperial Guard. He defended the M'Kraan Crystal from invaders under Emperor D'Ken.[2]

After the Kree/Shi'ar War, Mentor was one of the Guardsmen sent to Earth by Empress Lilandra. They uncovered a plot by Kree terrorists involving the Supreme Intelligence.[3]

During the second Kree/Shi'ar War, Mentor led a troop of Shi'ar soldiers to Knowhere while chasing the threat of Adam Warlock. He was momentarily shaken by the revelation that Warlock was using magic, a force outside his intelligence's ability to comprehend, but he quickly recovered and brought the Guard's sorceress Magique to the front lines to assist.[4]

When Praetor Kallark became Majestor after the war, Mentor rose to become the Guard's new praetor.[5]

During a mission to the Fault, Mentor was forced to give himself over as a host to the Fraternity of Raptors to augment their firepower. Mentor bonded with a Raptor amulet and was taken over by Strel. Neither Mentor nor Strel have been seen since, leaving his fate uncertain.[6]

Like this? Let us know!
Retrieved from "https://marvel.fandom.com/wiki/Mentor_(Imperial_Guard)_(Earth-616)?oldid=4949193"
Community content is available under CC-BY-SA unless otherwise noted.