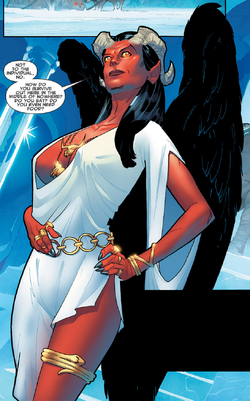 Mephista was the demoness daughter of Mephisto[4] and either an other demon[3] or an human mother.[2]

She battled Doctor Strange on a number of occasions.[5][6] She even eventually developed a romantic interest in Strange much to her father's annoyance.[6]

After slumbering for years, her father managed to awaken her. After this Mephista began calling herself Jezebel, and laying plans to prevent an apocalyptic war between the Hell Lords and save humanity.[2]

Jezebel began to ally herself with several powerful individuals such as the Isolantionist,[7] Morrigan,[8] and Strong Guy.[9][10] Like Darwin, Jezebel originally planned to kill Tier to prevent the Hell Lords' arrival on Earth.[10] When it became apparent she was too late, she fought along side X-Factor Investigations against her father and the Hell Lords.[11]

Jezebel is a demoness, and the full extent of her powers have not been defined. She has demonstrated the following powers:

Like this? Let us know!
Retrieved from "https://marvel.fandom.com/wiki/Mephista_(Earth-616)?oldid=6109727"
Community content is available under CC-BY-SA unless otherwise noted.