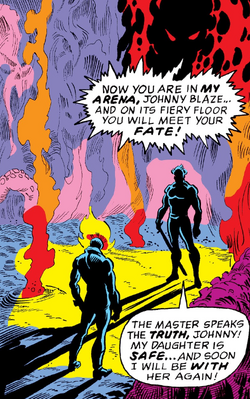 The realm of Mephisto was one of the many "death dimensions"[citation needed] and Splinter Realms. It usually referred to as Hades or Hell.[1] Time moves much more slowly here, a few days on Earth feel like many years here.[citation needed]

Mephisto's Realm is of the many Hell Dimensions, afterlives where the souls of those who committed evil were condemned for an eternity of torment, and ruled over by the demon-lord Mephisto - who often claimed to be the Biblical Satan and that his realm was the Biblical Hell. It is unclear exactly when Mephisto's Realm came into being, as the demon was active on Earth since at least four billion years in the past,[3] and had been collecting souls since at least 1,000,000 BCE.[4] However, Mephisto frequently neglected his realm in order to toy with mortals, seducing them into striking Faustian bargains with him in order to corrupt them and claim their souls.

The various Hell-Lords - Mephisto included - are bound by a pact to keep their realms seperate, though some - such as Lilith - harbor the ambition of merging the Hells together into a single realm ruled over by one king and/or queen.[5]

Forced to fight a duel against his adoptive father Crash Simpson, Ghost Rider and Crash were transported to Hell to battle each other. However, when Ghost Rider gained the upper hand, Satan sent demons to help Crash win the fight. When it came to delivering the killer blow, Crash couldn't do it, and Satan sent a demon to kill them both. Crash sacrificed himself to kill the demon, and Ghost Rider left his body with a robed figure who was apparently against Satan, returning to Earth.[6]

Deadpool would later kill his friend Micheal so he could tell Mephisto that his underling Vetis was stockpiling power in mortals so he could collect it later and overthrow him.[7]

Using a ritual, Blackheart attempted to merge Hell with Earth, starting with Las Vegas. Blackheart's scheme was opposed by Agent Venom, Ghost Rider, Red Hulk, and X-23; and although he managed to kill them they were resurrected by Mephisto. The four heroes managed to defeat Blackheart and reverse his ritual with help from Johnny Blaze, Daimon Hellstrom, and Doctor Strange, but had unwittingly been branded with Hell-Marks by Mephisto to mark them as potential successors should he ascend to become Satan during the Descent.[8][9]

Mephisto later enacted his own scheme to merge his Hell with Earth after Doctor Strange used a spell to undo the destruction of Las Vegas, erecting the Hotel Inferno and stealing the souls of the city's citizens. When confronted by the Avengers, Doctor Strange, and several other heroes, Mephisto forcibly bonded them to Spirits of Vengeance in order to make them his minions. Johnny Blaze tricked Mephisto into undoing the curse that bound him to his own Spirit of Vengeance and killing him. Blaze wound up in Hell and promptly usurped Mephisto's throne with the help of Zarathos and the other Spirits of Vengeance who Mephisto had enslaved over the millennia.[10]

With Mephisto imprisoned in the world of the living, Blaze became the new ruler of his section of Hell. When Alejandra was killed by Carnage, Blaze briefly sent her soul back to stop Carnage from destroying her hometown before formally welcoming her to Hell and introducing her to the other Spirits of Vengeance.[11] However, demons and damned souls began taking advantage of Blaze's inexperience as a ruler to challenge his claim to the throne,[5] many of them escaping to Earth and wreaking havoc,[12] and Blaze's soul began to be corrupted - turning him into a demon. Learning that Mephisto was apparently somehow escaping his prison to make deals with the likes of Miles Morales and Otto Octavius, Blaze broke him out of his prison and tortured him for information; Mephisto claiming that lesser demons had been taking advantage of his absence in Hell to impersonate him.[13] Slowly succumbing to his corruption and desiring more power, Blaze dragged Robbie Reyes to Hell in order to take his Ghost Rider powers for himself, but was stopped by the Avengers.[14] Blaze's corruption was cleansed by Danny Ketch, who had become host to the Spirit of Corruption, and returned Mephisto to his prison.[15] However, Mephisto eventually escaped - narrowly avoiding being slain by Khonshu - and began plotting to regain his full power and retake his throne from Blaze, assisted by Howard Stark.[3]

Like this? Let us know!
Retrieved from "https://marvel.fandom.com/wiki/Mephisto%27s_Realm?oldid=6496317"
Community content is available under CC-BY-SA unless otherwise noted.