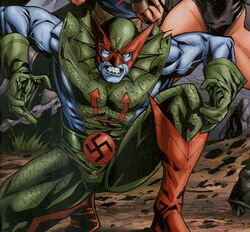 Meranno, alias the U-Man, was a frequent adversary of Namor the Sub-Mariner. Meranno was a member of the Homo mermanus species, also known as the Atlanteans. A research scientist in Atlantis, he was banished from the realm by Namor for wanting to betray them to Nazi Germany. Filled with a burning desire for revenge against Atlantis' ruler, Prince Namor, Meranno renamed himself U-Man (or, Unter-Wasser Mann) and joined the Axis Powers to fight Namor and his allies, the Invaders.[2] Meranno used Nazi scientific procedures to augment his natural abilities, making himself much stronger than the average Atlantean and enabling himself to survive on the surface for extended periods of time.

His first battle with Namor as U-Man came when he kidnapped Betty Dean and attacked a plane carrying Winston Churchill to the United States. He was defeated when the Invaders intervened, but managed to escape.[2]

He was part of Brain Drain's attack force against the U.S. He defeated Red Raven and Jack Frost and managed to steal an experimental jet engine for Brain Drain's swastika-shaped airship.[3] Meranno and the rest of Brain Drain's force were defeated by the Liberty Legion and the Thing who had traveled to the past to recover a lost container of vibranium.[4]

A Japanese spy called Lady Lotus used her psychic powers to control Meranno, Master Man, Baron Blood, and Warrior Woman, and made them into the villainous team known as the Super-Axis. Later, Meranno allied with another Atlantean malcontent, Attuma, in an attempt to conquer the surface world.

Meranno later allied himself with with Axis Mundi. During this time it was revealed that he had raped Lady Lotus and fathered her daughter, Nia Noble.[5]

He would then go on to assist the Brand Corporation in an offshore mining operation which would lead him to face Krang and the 50-State Initiative Defenders team.[6]

Meranno possesses various superhuman physical attributes common among the people of Atlantis, though some of his powers are considerably more developed than the majority of his race.


Amphibious Physiology: Unlike most Atlanteans, Meranno can not only survive underwater but he can also survive on land for an unknown period of time without suffocating. While he can't survive on land indefinitely, it is known that he can remain on land without a breathing apparatus for more than 20 minutes. Like all other Atlanteans, Meranno's natural habitat is the water and his body is specially adapted to enable him to survive underwater. He has gills that allow him to extract oxygen from water and his vision is specially developed to see the green end of the spectrum, enabling him to see perfectly even in the murkiest depths of the oceans. Meranno's physiology also allows him withstand extreme changes in water temperature and his blood circulation allows him to withstand extremely cold temperatures typical of great ocean depths.

Meranno is a highly intelligent and gifted research scientist. He is also a formidable hand-to -hand combatant.

Meranno appears to be susceptible to his daughter's mental abilties.

Meranno wears armor. Whether it is intended to compliment his already-considerable durability or is merely for show is unrevealed.

Like this? Let us know!
Retrieved from "https://marvel.fandom.com/wiki/Meranno_(Earth-616)?oldid=6076965"
Community content is available under CC-BY-SA unless otherwise noted.