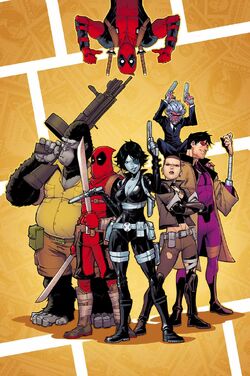 This group of mercenaries gathered together by Deadpool was originally named Heroes for Hire.[1] Deadpool was inspired to create a franchise around his identity after Solo impersonated him, and piggybacked on the merc's success to take jobs at Deadpool's pay rate. Solo's impersonation helped Deadpool become more popular, thus benefiting both mercs.[2]

After turning Solo into his first employee, Deadpool began to recruit other vigilantes, who would initially wear costumes identical to his.[1] Following a cease and desist letter from Luke Cage, the leader of the original and defunct Heroes for Hire,[3] Deadpool's team was legally forced to change their name, and they chose "Mercs for Money."[4] Around this time, the Mercs for Money began to use color-coded costumes to distinguish each other from an independent Deadpool impersonator who was ruining the real one's reputation.[5] This evil impersonator ended up being revealed as Madcap, who was also a member of the Mercs for Money.[6] Once they got rid of Madcap, the Mercs for Money began using their own personal uniforms.[7]

The Mercs for Money eventually became disgruntled by Deadpool, from the way he treated them to the delays in their paychecks.[8] When they set out to create their own business, the Mercs discovered Deadpool had been skimming from them.[9] After retrieving and burning their contracts from a safety deposit in Ho-Ho-Kus, New Jersey, the Mercs and Deadpool parted ways.[10]

In order to help Deadpool rescue Negasonic Teenage Warhead from Umbral Dynamics, Domino assembled a new team of Mercs of Money, composed of herself, Masacre, Machine Man, and Gorilla Man.[11]

Like this? Let us know!
Retrieved from "https://marvel.fandom.com/wiki/Mercs_for_Money_(Earth-616)?oldid=6473828"
Community content is available under CC-BY-SA unless otherwise noted.