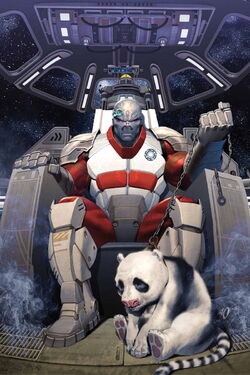 We shall meet again, Venom. And next time you both die.

Mercurio is a native of the planet Gramos, the third world circling the star Sekar in the Milky Way. His world was threatened with extinction when a gravitational distortion blocks out all sunlight.[3]

In a bid to save Gramos, Mercurio was chosen to project his consciousness across the galaxy to Earth, where he took control of a wealthy landlord named Karl Sarron and used his resources to build a device to siphon off Earth's electromagnetic field.[1] Mercurio also detected strange energies coming from the offices of Dr. Donald Blake, the alter-ego of the thunder god Thor. Witnessing a transformation from Blake to Thor, Mercurio siphoned off some of the magical energy in an attempt to transport his body across space to Earth. The process was only partially successful as the right side of Mercurio's body was turned red and his normal fire-generating ability was reverted to ice (on the left side only). Mercurio then battled Thor but was quickly defeated.[2]

Several weeks after returning to Gramos, Mercurio led an army to find the God Jewel, a gem containing enough energy to sustain Gramos forever.[4] The God Jewel, however, proved to be sentient and evolved into a humanoid form called "Xorr", and was capable of sucking the life energy from any source. Coincidentally, Thor and several allies were also seeking the God Jewel as it had imprisoned two Asgardian goddesses. With Thor's help Xorr was defeated, and Mercurio retrieved several fragments of the God Jewel for use on Gramos.[5]

Although Gramos was saved, Mercurio developed a desire to conquer, and attempted to trick Captain Marvel into visiting Gramos and building the Omni-Wave Projector - a device capable of emitting energies on a galaxy-wide scale. Captain Marvel's cosmic awareness, however, warned him of the trap and, after defeating Mercurio, he returned to Earth.[6]

He was captured by the enigmatic alien, the Stranger, and was imprisoned in the Stranger's Labworld for the alien to study him.[7] He remained there until freed by Overmind.[8]

Artur Zarrko, the Tomorrow Man pulled Mercurio and other villains from out of the timestream to battle the Thor Corps. The three Thors managed to defeat all the time-lost villains returning them to their original points in time.[9]

Still disguised as Karl Sarron he released extradimensional creatures to attack Connie Ferrari. Captain America investigated and met with Sarron, who told him he could use Captain America's Shield and his dimensional oscillator to create a portal to expel the demons. The two went to the top of the Statue of Liberty and Cap allowed his shield to be placed in the dimensional oscillator. Mecurio revealed the truth telling him he tricked him into helping escape through a portal back to his home planet. The vibrations from Mercurio's oscillator caused the Statue of Liberty to vibrate and fall apart. Cap disengaged his shield from the dimensional oscillator and Mercurio transported away.[10]

Attempted Conquest of the Galaxy

As part of his delusions of conquering, Mercurio began to amass weapons from all over the galaxy.[11] He also hired the pirate Kio to acquire chemical weapons and had inserted a drill to retrieve resources from the planet of the P'qui. Both of his plans were foiled by Venom.[12]

In retaliation, Mercurio sent one of his subordinates, Pik Rollo, to kill Venom.[13] However, Rollo ended up making a deal with Venom to join forces and together deal with Mercurio.[11]

As part of an intricate plan, Venom and Pik Rollo traveled to Mercurio's base. Rollo pretended to double-cross Venom, allowing Mercurio's soldiers to strip him of the symbiote. Mercurio donned the creature, believing to have turned it to his side.[14] However, after bonding with Mercurio to do a recon mission and learn of the villain's armada, the symbiote returned to Venom.

Numerous of the allies that Venom had made in his space adventures joined forces to destroy Mercurio's armada and base, forcing the villain to retreat, vowing to have revenge on the symbiote and its host.[15]

Thermokinesis: As a native of the planet Gramos, Mercurio possesses the ability to generate intense heat, usually in the form of a fireball or wall of flame. As a result of his "accident", Mercurio can now emit intense cold from the left side of his body. He is also able to use both abilities simultaneously. Mercurio also possesses enhanced strength and flight, although it is not known whether the latter is an innate ability or is achieved via technological means.

Transparent life-support suit which provides him his atmospheric requirements for 6 hours before replacing them.

Like this? Let us know!
Retrieved from "https://marvel.fandom.com/wiki/Mercurio_(Earth-616)?oldid=6392544"
Community content is available under CC-BY-SA unless otherwise noted.