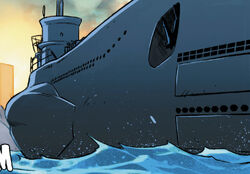 The Mercury was the ship captained by the White Bishop. The Mercury was part of the Hellfire Trading Company's fleet along with The Marauder and The Upstart.[2]

The unique and mysterious craft known as The Mercury was obtained by the White Queen for the use of the White Bishop of the Hellfire Trading Company.[2][3] The ship was piloted via a neural interface that shapes itself to the user; for Christian Frost, the helm was a piano.[1][3]

With Iceman and the White Bishop aboard, The Mercury in a submarine form was sent on a trial run to the Arctic to quell wildfires breaking out.[1]

The Mercury arrived at Island M to rendezvous with The Marauder and Callisto, the new White Knight.[4]

The Mercury in its submarine form ferried Iceman, Christian, and Emma to the seas near Madripoor to rescue Bishop and Kate Pryde's corpse from the Madripoor Police.[5]

When intercepting a splinter group of Russian army, The Mercury in a flying saucer form was employed to attack the ship, return the soldiers to Russia, and then destroy their sea vessel.[3]

Like this? Let us know!
Retrieved from "https://marvel.fandom.com/wiki/Mercury_(Vehicle)?oldid=6434798"
Community content is available under CC-BY-SA unless otherwise noted.