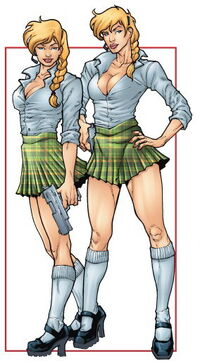 Two twin killers whose first victims were their parents. They went on a killing spree, targeting anyone who upset them, such as a rival school's star soccer player and a "nosy" delivery boy, they stashed the bodies in their family's Southampton summer residence.

A school administrator then realized their absence was becoming noticeable and Grace killed her with a hockey stick. They then killed a rock star named Killer Dick.

Later they would become hunted by Deadpool for the large sum on their heads. Trying to kill Wade, they ran into him with their car, but Mary forgot her seat-belt and was mortally wounded. They fled to their summer home where Grace euthanized Mary and swore revenge on Deadpool. She challenged him, and when he showed up, was shot in her face with a high powered sniper-rifle, killing her instantly.

Weapons: They were skilled in the use of various conventional tools and weapons such as handguns, hockey sticks, chainsaws and knives.

Retrieved from "https://marvel.fandom.com/wiki/Mercy_Sisters_(Earth-616)?oldid=5548721"
Community content is available under CC-BY-SA unless otherwise noted.