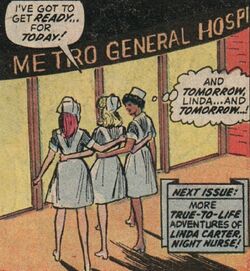 After moving to New York City, Linda Carter, the Night Nurse began work at this hospital along with Christine Palmer and Georgia Jenkins.[5]

In Earth-199999, Metro-General Hospital, sometimes called Metropolitan General Hospital,[6] is a public hospital located in Midtown Manhattan. Both Claire Temple and Shirley Benson are employed at this facility.[7][8] Until recently, Doris Urich resided at this hospital.[8][9]

After being shot, Detective Blake was recovering at this hospital until he was killed by his partner, Detective Hoofman.[10]

When Vanessa Marianna was mysteriously poisoned during a fundraiser for Wilson Fisk, she was rushed to Metro-General Hospital because it was the nearest hospital.[11] She was eventually stabilized and fully recovered while at this facility.[12]

Like this? Let us know!
Retrieved from "https://marvel.fandom.com/wiki/Metro-General_Hospital?oldid=5490298"
Community content is available under CC-BY-SA unless otherwise noted.