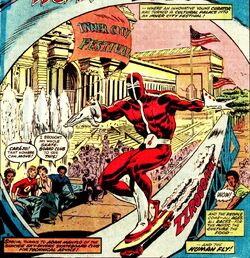 At an Egyptian exposition at the Metropolitan Museum of Art, Spider-Man witnessed young woman Akasha Martinez grabbing the Staff of Horus and becoming the Living Pharaoh.[1]

Akasha blasted the hero with enough power to kill him, but she could not bring herself to murder a hero and teleported away.[2]

A short time later, the fabled Hand of Mumthazi was stolen from the "Wonders of Ancient Sufind" exhibit by Jack O'Lantern.[3]

On Earth-7642, Doctor Octopus and his henchmen robbed. Spider-Man tried to stop them, but was defeated by Octavius' newest invention, the Flying Octopus. When the NYPD arrived, they found that the crooks had escaped so they attempted to arrest Spider-Man, only for him to escape as well.[5]

Conan and his Barbarians gang broke into the Metropolitan to steal the jewelry from the Gold of Hyboria expo. After Karim accidentally set off the alarm, Captain America intervened to stop the robbers, but he was defeated in duel by Conan.[6]

Like this? Let us know!
Retrieved from "https://marvel.fandom.com/wiki/Metropolitan_Museum_of_Art?oldid=6031011"
Community content is available under CC-BY-SA unless otherwise noted.