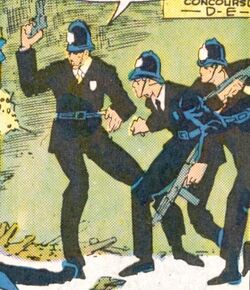 They were sometimes to be confronted with meta-human activity, like superheroes and "villains",[10] and supernatural threats, such has the Vampires.[2] Regarding the metahuman activities, those were sometimes taken from the Met by specialized agencies such as the R.C.X..[11]

Regarding the situations and ranks, some police officers weren't equipped with guns during their duty,[10][3] an exception being the members of the Special Branch.[10]

Parnival Plunder used his public status as a respected lord to summon the police to his home, blaming Ka-Zar and Daredevil for burglary and murder.[12]

When Kree Eternal Demon Druid awakened from his three-thousand-years imprisonment, knocked out Thor and rampaged through the street, facing police then military resistance, Lieutenant Prichard informed Thor of the situation. Approached by a Royal Astronomical Society professor and witnessing the symbol on Demon Druid's chest, he deduced after a little research that the alien simply wished to return to Stonehenge, a launching pad for his people. Prichard was able to reach Thor and the military there and reveal his discovery, urging them to stand down and to let Demon Druid leave the planet without further violence.[6]

Circa 1973, Constable Thomas Lawson was bitten while trying to stop an "assault" from a "tall man in an opera cape" on a young girl on Marylebone Street. Since, he asked to make night switch.[2]

In the fight against the Vampires, circa 1975, the Metropolitan reluctantly had to work with vampire hunters Quincy Harker and Rachel van Helsing, but had more trouble dealing with Eric Brooks, less incline to cooperate.[2]

After the murder of Vampire Stephan Roak and an altercation with Chief-Inspector Dai Thomas, Blade was framed for the murder of twelve-years-old Josie Harper and made believed he indeed killed her.[2]

Dai Thomas feeling guilty for the girl's death and doubting Blade's culpability, he summoned his assistant Detective Kate Fraser who used her psychometric abilities, discovering that Blade was innocent from the crime he was accused, and strove to prove his innocence, opposing the Legion of the Damned led by Marguerite d'Alescio. d'Alescio was furthermore informed by Constable Thomas Lawson of Kate's discovery. Blade was eventually cleared of charges.[2]

Still trying to oppose Captain Britain, Dai Thomas presented his work to his superior, claiming that the masked hero was none else than Brian Braddock. That information was then transferred to the R.C.X. for them to investigate.[13]

Equipment: Helmets (for the constables), morgue with forensics material.[2]
Transportation: Various official vehicles
Weapons: Guns (although in duty, exception including the members of the Special Branch, many agents aren't allowed to carry and use firearms),[10] nightsticks[2]

Retrieved from "https://marvel.fandom.com/wiki/Metropolitan_Police_Service_(Earth-616)?oldid=5812456"
Community content is available under CC-BY-SA unless otherwise noted.