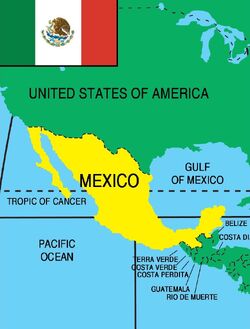 You asked me--How could such a beautiful land be ruled by such evil? Simple: Water takes the path of least resistance. Makes for crooked streams and crooked names.

Mexico, officially the United Mexican States is a federal republic located in North America. Mexico is a federation comprising thirty-one states and a Federal District, Mexico City its capital and largest city. It borders the country of United States of America to the north with the Caribbean Sea on it's east coast, the Pacific Ocean on it's west coast and Guatemala to the south.

Like this? Let us know!
Retrieved from "https://marvel.fandom.com/wiki/Mexico?oldid=4817067"
Community content is available under CC-BY-SA unless otherwise noted.