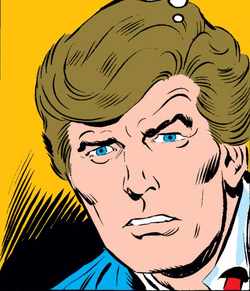 Dr. Michael Barnett was a New York psychiatrist who was treating Carol Danvers, who at the time was suffering blackouts and did not realize she was the superheroine Ms. Marvel.[1] Once Ms. Marvel resolved her identity crisis and synched her two identities, the two began dating.[2] Barnett was later ambushed and brutally beaten to death by Mystique in his own office.[3]

Dr. Barnett was a trained psychiatrist.[1]

Like this? Let us know!
Retrieved from "https://marvel.fandom.com/wiki/Michael_Barnett_(Earth-616)?oldid=6691962"
Community content is available under CC-BY-SA unless otherwise noted.