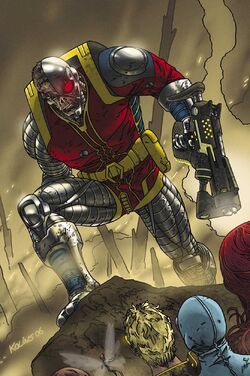 Hair
Brown (as Collins); Light Brown (as Deathlok)
Unusual Features
Deathlok possesses a massive cyborg body. The right half of his face is in a semi-decomposed state. The left half of his face is in an armored cybernetic implant. Deathlok has two toes on each foot.
Origin
Origin
Human with his brain implanted into a Cyborg.
Reality
Earth-616
Place of Birth
Philadelphia, Pennsylvania
Creators and Appearances
Creators
Dwayne McDuffie, Gregory Wright, Jackson Guice
First Appearance
Deathlok #1
(July, 1990)

Originally, Michael Collins was a computer programmer working for Roxxon Oil. He thought that his programming for artificial limbs was going to be used to help handicapped people, not knowing that it was actually being used for the Deathlok Project.

After he found out about his work being used for the creation of a killing machine, he complained to his friend and boss, Harlan Ryker, not knowing that Ryker was behind the Deathlok Project. Ryker betrayed Collins and had his brain placed into the Deathlok cyborg body.

When Michael awoke, he found himself in the cyborg body, but unable to control it. The Deathlok cyborg was then tested, and Michael watched in horror, unable to do anything, as his cyborg body killed a couple of soldiers.

Eventually, Michael gained control of the Deathlok cyborg and set out to find Harlan Ryker and make him pay for what he had done to Michael.

Michael caught up with Ryker as he was making illegal weapons sales to a private army. Before Michael turned Ryker over to the authorities, he found out that his human body still existed, somewhere.

Beyond & Return to Earth

Much later, he was discovered on a new Battleworld on which he had been trapped for years, Deathlok helped fellow super-powered individuals; Dr. Pym, Wasp, Spider-Man, Venom, Hood, Gravity, Firebird, Medusa, and Al Kraven battle the Dragon Man and the Space Phantom who was impersonating Spider-Man. The Stranger was revealed as the one behind bringing them there, and ultimately they were able to escape. During the conflict it was revealed that he could now return to his human form at will and once he had returned to Earth he found that he was unable to become Deathlok again.[3]

Cyborg Physiology: Inspired by the original, this Deathlok similarly possesses a variety of superhuman attributes as a result of extensive cybernetic augmentation.

Despite his cybernetic enhancements, Deathlok is still vulnerable to certain human needs. He still requires oxygen to breathe, and needs to sleep. He also requires nourishment, but his simplified digestive system is only capable of absorbing nutrients in a liquefied form.

He has a plasma pistol built into his body that takes its power from his internal plasma reactor. He also carries in a built-in back-pack, and has access to a plasma assault rifle and plasma grenade launcher.

Like this? Let us know!
Retrieved from "https://marvel.fandom.com/wiki/Michael_Collins_(Earth-616)?oldid=6500109"
Community content is available under CC-BY-SA unless otherwise noted.