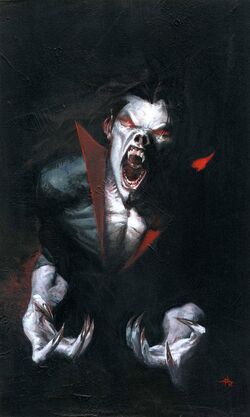 Dr. Michael Morbius was a scientist born in Greece who became a Nobel Prize winning biochemist. He suffered from a debilitating blood disease and developed an experimental treatment involving vampire bats and electroshocks. Its side effects turned him into a pseudo-vampire who needed to consume blood in order to survive, and gained typical vampire characteristics such as an aversion to sunlight, and the powers of flight, enhanced strength, speed, and healing (a healing factor). His overall appearance changed as well: he gained fangs, his nose flattened to appear more bat-like, and his skin became extremely pale. Additionally, the victims of his bite would turn into living vampires themselves. When he first experienced the change, he killed the assistant who had helped him develop the treatment.[3]

Morbius traveled to the U.S by ship, and in his blood thirst slaughtered the crew. He tried to kill himself but failed and took a room at a beach house where he encountered Spider-Man who was, at the time, trying to reverse the process that had given him six arms. Morbius attacked Spider-Man, but their battle was interrupted by Dr. Connors who transformed into the Lizard.[4]

Morbius escaped, but not before biting Connors (which partially returned him to normal). Spider-Man and Connors realized that Morbius' blood could be a cure for both of them and decided to help each other. They tracked him down and after another battle extracted some of his blood, causing Connors to remain in his human state and Spider-Man to lose his additional arms.[3]

Morbius was washed ashore and found by Jefferson and Jacob Bolt, on whom he tried to feed after being revived (he turned Jefferson into a vampire). Meanwhile, Morbius' fiancé Martine Bancroft tried contacting the Fantastic Four to help Morbius. The Human Torch sought out Morbius' former colleague, Hans Jorgenson, and joined forces with Spider-man during another battle with Morbius. During the fight, Morbius accidentally killed Jefferson Bolt and fled.[5]

When news of Jorgenson's supposed kidnapping by Spider-Man reached Professor X (an old colleague of Jorgenson), he sent the X-Men to track down Spider-Man. When he discovered that Morbius was truly to blame, he sent the mutants to capture him instead. After a lengthy battle, the X-Men managed to defeat Morbius and rescue Jorgenson. Jorgenson was able to cure Spider-Man, who thanked the X-Men before leaving them to deal with Dr. Morbius.[6][7]

Michael Morbius and Martine Bancroft battled Reverend Daemond and encountered the Caretakers of Arcturus.[9] He visited the Land Within, home of the Cat People.[10] Battling their greatest warrior, Balkatar,[11] Balkatar and Morbius worked together to take down Daemond.[12] He was hunted by Blade the vampire slayer until Blade became aware of his plight, the two cooperate to battle Daemond.[13] Daemond creates Tara, a Psychic vampire.[14] Morbius is able to kill Daemond and Tara.[15] He then encountered Simon Stroud, a CIA agent tasked with hunting him.[16] Together, they battled the Helleyes.[17] Morbius, Martine, and Stroud later battled vampires at Mason Manor.[18]

Morbius joined the team Legion of Monsters, who united by chance to investigate the appearance of the Starseed. Though Starseed was a benevolent entity, both the Werewolf and Morbius, overcome by their monstrous hungers, attacked it. Ghost Rider and Man-Thing attempted to intervene, but Starseed was unable to overcome his fear of Man-Thing and suffered severe burns at his touch. The dying Starseed attempted to cure the Legion of their monstrous forms but was too weak and died.[19] Morbius visited his old scientist friend Ronson Slade in hope for a cure to his disease. Ronson, however had become a werewolf and Morbius was forced to kill him.[20]

Driven mad by his bloodlust, Morbius battled Spider-Man again, but was restored to his human form when he hit by a freak bolt of lightning.[25] He remained human for some years, assisting both Spider-Woman and the West Coast Avengers at various times, but his vampiric condition eventually returned.[26]

Scientist and Hydra agent; Dr. Loxias Crown kidnapped Morbius to study him.[27] Spider-Man came to his rescue but when he freed Morbius he attacked Crown. As they grappled the island began to explode. In the resulting explosion, Morbius drained his blood.[28] This lead to him becoming a living vampire like Morbius.[29]

Morbius was registered under the SHRA. He was sent by S.H.I.E.L.D. to convince Blade to register.[30]

Some time after this, once again suicidal and searching for a way to end his life, he travelled to San Francisco where he took to living in an abandoned church frequented by young drug addicts, while he attempted to go without feeding. One of the addicts, Roxy, who Morbius related to the most, overdosed and was going to die which led her boyfriend to plead with Morbius to turn her. Roxy had gone too long without breathing when Morbius fed upon her, when she turned the brain-damage the lack of oxygen had caused rendered her feral and only interested in feeding. Morbius watched as she killed two of her companions and only stepped in when the last of them, who had shown him kindness and compassion, was to become Roxy's victim. Morbius killed Roxy by breaking her neck and left, Gillie, her victim alone and terrified of him.[31]

Michael worked with A.R.M.O.R., an organization tasked with keeping an eye on extra-dimensional activity on the planet. As such, when cross-over with a zombie infected universe occurred in Man-Thing's swamp, Command, was dispatched to investigate. However, it was revealed that Morbius had been incapacitated and replaced within the organization by a zombified, extra-dimensional version of himself.[32] How long this had been the case was not clear. A member of A.R.M.O.R came in to check on the zombie Morbius and found the real Morbius but was then bitten by the zombie Morbius (and incited a zombie plague).[33] When Morbius was able to move again, he snuck behind his zombie counterpart and drove a stake through his heart. This turned him into ashes.[34]

While staying in Monster Metropolis, the remaining pieces of a dead Frank Castle were brought by the sewage system. Morbius and the Legion of Monsters revived him into a Frankenstein's Monster shape. They needed him to fight against Hunter of Monster Special Force who killed monsters for "not being of God." [36]

Morbius was working on a cure for the zombie virus but was unable to find it, as the virus's genetic code was too complicated to decipher. Morbius found a Planestorm has opened a gateway to alternate realities.[37] Each of them had a different zombie virus, and the only way to decipher his home realities' virus was to compare it with other zombie viruses.[38] Morbius took some equipment from A.R.M.O.R and sent Howard the Duck and Machine Man to the alternate realities to bring him a sample of each virus. Some time later, the director of A.R.M.O.R Charles Little Sky discovered Morbius' plans and the missing A.R.M.O.R tech and put him under arrest.[39]

Later, he secretly joined Horizon Labs with the help of his friend Max Modell (who was in charge of the lab). He took the identity of Number Six and, in a hazmat suit to protect his true identity, assisted Mr. Fantastic in preparing the cure to the spider-powers virus.[40] When Peter Parker tried to investigate the identity of "Number Six," he accidentally provoked Morbius, who had been using the cure to try to develop a basis for a cure for his own condition, into a frenzy. Morbius was driven to leave when it was revealed that he had been working with the The Lizard. He had been trying to find a cure for both of their conditions.[41] He used DNA samples from the corpse of Doc Connors' son (Billy) to create a cure that would restore the Lizard to human form, but he failed to recognize that the Lizard had fully destroyed Doc Connors' human persona.[42] They left the Lizard alone in Morbius' lab, allowing the Lizard to release blood into the laboratory's air vents to provoke the injured Morbius into attacking the other scientists. Morbius fleed the laboratory with Spider-Man following.[43] Morbius was captured by Spider-Man and locked up in a cell in the Raft.[44][45]

When Peter Parker mind was transferred into Doctor Octopus' dying body, he organized a group of prisoners at the Raft to capture Spider-Man (who now contained Doc Ock's mind). During the break out, Morbius offered his help but was refused; he chose to work with the Lizard instead.[46] The cells turned off and Morbius escaped from the Raft.[47]

Morbius lived on a crime filled street in Brownsville where he meet a street thug named Noah St. Germain. The two ended up having a fight in the subway, which left Morbius mortally wounded with a gunshot wound in the chest (even after saving St. Germain's life from an oncoming train). Morbius killed Noah and his gang. After killing the Godfather of Brownsville, and incited a gang war against The Rose. After the Battle of Brownsville, he escaped to Manhattan, to Horizon Labs, to finally cure his vampirism. Morbius worked with the new superior Spider-Man. Morbius found out The Rose had an Ultimate Nullifier in Brownsville and teamed up with the Legion of Monsters. Morbius killed the Rose.[48]

Like this? Let us know!
Retrieved from "https://marvel.fandom.com/wiki/Michael_Morbius_(Earth-616)?oldid=6105517"
Community content is available under CC-BY-SA unless otherwise noted.