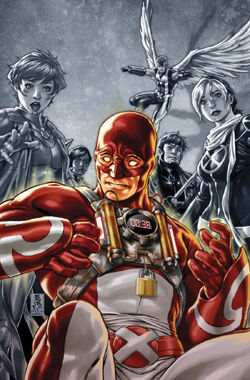 That man's no hero, but he'll make a hell of a warden.

Michael Pointer was a mutant who used to work as a postman and didn't know he was a mutant. On M-Day, Michael absorbed the gestalt being that emerged from the energy mass created by the released energy following the Scarlet Witch's depowering of most of the mutant population. The energy mass arrived on Earth at the town of North Pole, Alaska,[1] destroying the town and its inhabitants, including Michael's parents, brother and girlfriend Lindsey, while taking over his body.[6] A S.H.I.E.L.D. convoy observed a humanoid form but were unable to make sense of the energy readings. It turned and easily destroyed the convoy. As it approached the Alaskan border, SHIELD went on high alert. Alpha Flight was sent in to stop the being. All members were presumed dead from the resulting confrontation. It continued to head towards the US border.[1]

Despite Maria Hill's reluctance, the New Avengers were dispatched to stop it. Ms. Marvel and the Young Avengers were contacted to help and Captain America asked that agent Daisy Johnson be notified. Iron Man attempted to make contact with the Collective. It mentioned the name Michael--records showed a postal worker named Michael Pointer had been caught up in its arrival on US soil.[7]

Ms. Marvel suddenly engaged the being, absorbing massive amounts of energy in the process to the point where she resembled her Binary persona. After continuing to battle the being, she explained it was composed of multiple signatures, all attempting to overwhelm her. The Collective then attacked Iron Man with magnetism. Sentry arrived and was able to knock it into orbit. They continued their battle in space. Iron Man was able to regroup with the help of Captain America and went to assist the Sentry.[7]

Analysis by Spider-Man (Peter Parker) and Vision (Jonas) determined the energy signatures match those of mutants depowered by the Scarlet Witch. This revelation came at a cost, as SHIELD was able to learn about the House of M incident due to its Psi-Corps listening in on Spider-Man's conversation with Iron Man. Based on their readings, SHIELD recommended Iron Man and Sentry disengage.[8]

The Collective returned to Earth and landed in Genosha. Upon finding Magneto, it attempted to transfer itself over to him. Magneto addressed it as Xorn. It seemed the gestalt was looking for the proper host. Several of the victims of the Wild Sentinels attack were reanimated to attack the New Avengers. Magneto was attacked by Daisy Johnson, leaving him in a comatose state. The Sentry, Ms. Marvel, and Iron Man contained the Collective's energies. The energy was dispersed into the sun. Michael and Magnus were placed into SHIELD custody. However, the transport carrying Magneto mysteriously exploded. No signs of his body were found.[9]

Michael was examined by Mister Fantastic and interrogated by SHIELD agents. He was appointed as Guardian on the Canadian Omega Flight team to make up for his destruction of Alpha Flight, during this time he acknowledged that he had been used as a weapon by Xorn but still felt tremendous guilt for his actions, to the point of begging Talisman to kill him.[2][10]

Michael received therapy from Dr. Benning while serving as a member of Omega Flight, during which he revealed that the traces of the Collective inside him were also merging with his memories, causing him to remember and dream about what the Collective had done while controlling him which troubled him deeply. During this time his powers, which he had come to both fear and enjoy, had also began to seemingly decline as well as fading in and out beyond his control.

Unbeknownst to Michael, Agent Brown of the CSIS was having people experiment on him by transferring energy to him through his Guardian suit from SHRA violators who had fled from the US to Canada and been apprehended by Omega Flight and then drugged with Mutant Growth Hormone so Michael could tap into their energy and become addicted to the procedure. Both USAgent and Michael became suspicious and Michael began to tap into the minds of those whose energy he'd been fed which unbalanced him as he also began to tap into their powers.

Michael learned that Dr. Benning had been the one truly behind 'Weapon Omega' with Agent Brown unaware of where the power for the Guardian suit was coming from and solely trying to make him addicted, as well the fact that the minds of those who died during the power transferral, such as the telepath Susan Catrini, joined the remnants of the Collective inside him. Michael was able to make Omega Flight aware of what was being done to him and take Dr. Benning down and then made his way back to North Pole to help rebuild it.[5]

Three days before the discovery of the Skrull Invasion, Pointer visited Cape Columbia to try to recruit Snowbird; in vain as she despised him for having cause Alpha Flight's death as the Collective, wearing James Hudson's uniform, and asking her to join a team named after Alpha Flight's enemies.[11]

Emma Frost recruited Michael to be on her team of X-Men working for Norman Osborn. Norman helped get Michael on the team by manipulating him to think he needed to make up for the deaths he had caused in Canada. Michael's new suit was changed to remove the reference to the Guardian, one of the heroes he had inadvertently slain.[12] Dark Beast created a device to siphon powers from mutants into Weapon Omega that Michael ultimately developed an addiction to. After the reshuffle of Osborn's X-Men, the power ups began deeply effecting Pointer's psyche. The remnants of the personalities of the mutants he had been draining energy from seeped into his mind. Pointer later experienced nightmares of the mutants he had adsorbed taunting him.[13]

After the downfall of Norman Osborn, Omega and Mimic went underground. Michael tried to kick off his addiction and Mimic tried to help him by letting him feed on his power that he mimicked. That didn't help and it made him ill. Mimic took him to the Jean Grey School for Higher Learning so Beast could help him. When they arrived, Mimic asked Beast to help Michael but the energy of the mutants in the school drove Michael crazy and he almost hurt a student. He was stopped by Chamber and calmed down by Marvel Girl (Rachel Grey). After taking him to the basement lab, the team found out that feeding on Mimic's artificial mutant power changed Michael, and feeding on the energy of so many real mutants sparked a reaction with energies inside him hat would release explosively, killing Michael and everyone around him. Michael told them he was willing to die and all they had to to was lock him inside a vault and let him explode, but Rogue talked him out of it. The team tried Mimic's suggestion to divide Omega's powers between Rogue and Mimic after he copied Rogue's power. However, this attempt backfired, as Omega's energy became self-sustaining and instead of dividing it, Rogue and Mimic replicated it, which meant instead of having one bomb now they had three bombs.

In order to keep the three human time-bombs from detonating, multiple attempts were made using Rogue to try to override the energy absorption. None of them worked, and the time came where Beast asked Rachel Grey to put all three into a psychically-induced coma, if need be. She reluctantly agreed.

After a brief conversation with Mimic outside, Rogue gleaned the information from him that in a previous battle with the Super Adaptoid, he had used his mimicry powers to essentially "cancel out" both of their abilities. With this idea, Rogue went to Hank with the same idea: if all three absorbed one another's powers at the same time, they would cancel one another out. With time running out until detonation, Hank agreed.

In the locked vault, the three attempted to block one another out; Rogue and Mimic believed it had worked, as they were no longer overwhelmed with energy. However, it was revealed that Omega had actually absorbed the energy, and would detonate at any time.

Left with no choice other than suicide, Omega said some final words to Mimic, "I'm looking forward to seeing what's next". He also requested that Mimic copy Rachel's powers to induce the coma, as he felt more comfortable with his best friend performing the procedure.

With Rachel guiding him telepathically, Mimic then placed Omega into a coma, and the energy stabilized. Beast assured them that he'd work on finding a cure, and had him placed in a stasis tube in a sub-basement of the school, where he is currently being cared for until a cure for his condition is found.[14] Michael's condition was getting better after the Phoenix restored the mutant race.[15]

Omega was next seen with Mimic in Montana helping with the cleanup made by a recent hurricane. They were approached by X-Men member ForgetMeNot who wanted Omega to remove his powers so people would be able to know that he existed. While they tried to explain to him that if Omega removed his abilities, there was a possibility he could be killed. In the midst of the decision the three of them were interrupted by Cyclops and his group of X-Men who tracked down Omega and Mimic to see if they would join their cause.

Turning down their offer, a battle erupted between them until ForgetMeNot made himself noticed and asked Omega and Mimic to copy his powers so they would become unseen and then unforgettable to Cyclops and the others. They teleported away without remembering their entire encounter. Omega then explained to ForgetMeNot that he could take his powers away, but that would just make him a regular person with no history. Convinced by their speech he decided not to go through with it as he turned around which made Mimic and Omega forget about it, he then watched as they flew off into the sky.[16]

Mutant Energy Absorption: Michael Pointer is a mutant with the ability to absorb the energy of other mutants and project the energy outward in powerful blasts. As the Collective, he contained the inherent power of almost every mutant on the planet. The full capabilities of the Collective/Omega are unknown.

He currently wears a suit designed to help him control his power and originally wore the Guardian Suit.

Xorn's consciousness was the dominant energy and mind within the Collective.[9]

X-Man mentioned to Omega if he had been given the chance, he could have shown Michael why he was the most important mutant on the planet.[17]

Like this? Let us know!
Retrieved from "https://marvel.fandom.com/wiki/Michael_Pointer_(Earth-616)?oldid=6543447"
Community content is available under CC-BY-SA unless otherwise noted.