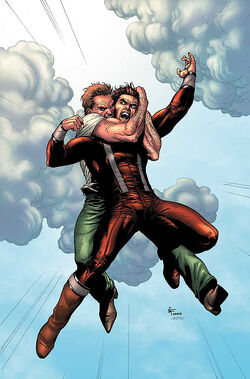 The first supervillain to appear in the Supreme Power universe, Redstone is what the US government has dubbed a "Power." In essence, he is on par with the likes of Hyperion and Power Princess, but he does not yet exhibit the degree of control over his powers Hyperion possesses, though it can be inferred that this is Redstone's personal choice.[citation needed]

Michael Redstone was in military prison introduced as a renegade soldier and serial killer who murdered six women, five primarily, though not exclusively, black prostitutes and one Sergeant Alicia James. The murder of the female sergeant, who outranked him, was said to demonstrate "a psychology that loathes women who have any amount of power over him." A secret government group had been grafting a retro-virus based on Hyperion's DNA to military convicts who volunteered as human guinea pigs. Redstone had been one such volunteer.[citation needed]

After getting his powers (super strength, invulnerability, and "Flash vision"; notably, he does not gain Hyperion's ability to fly), he and an unknown number of other test subjects escaped. Redstone resumed killing prostitutes, again mostly black women, but this time in greater numbers, attracting Nighthawk's attention. Due to the detective work of Nighthawk and the assistance of Hyperion and Blur, Redstone was apprehended again. The team used a substance that blocked Redstone's nose and mouth, showing Redstone that he still needs oxygen to survive.[citation needed]

Dr. Spectrum arrived at the scene after the fighting, to take Redstone into custody and to a prison originally made for Hyperion. General Richard Alexander makes a deal with Redstone, and has him dropped into an unknown country whose government is being what the United States considers difficult. Redstone's mission is simple: kill as many people he can, in order to cause mass panic and governmental instability.[citation needed]

Since then, he has seemingly escaped government control and was last seen hiring out his services to the Chinese government, whose intent is to counterbalance the superhuman weapons threat presented by the Squadron Supreme; subsequently, he tracked down Hyperion himself, and confronted him in Los Angeles.[citation needed]

Consequently, Redstone and Hyperion's fight resulting in the deaths of many innocent bystanders. Hyperion attempts to hurl Redstone into orbit but Redstone has prepared a nuclear weapon stolen from a submarine that had sunk in the Norwegian Sea. The bomb will explode if it does not receive a signal from him every 5 minutes. Redstone insists Hyperion let himself be beaten to death or the device will be triggered. Hyperion is blinded by Redstone's Flash vision and Redstone's rampage takes the lives of many citizens. Zarda arrives to save Hyperion but he insists she dispose of the bomb (which she does). Finally Blur forcibly recruits Nighthawk to aid in the battle and the three heroes confront Redstone.[citation needed]

While he is almost impossible to injure through physical means he still need to breathe and will therefore suffocate like a normal human if deprived of air. Also, his invulnerability doesn't appear to extend to toxins, this way he can be incapacitated if he is forced to inhale gasses.

Like this? Let us know!
Retrieved from "https://marvel.fandom.com/wiki/Michael_Redstone_(Earth-31916)?oldid=6131325"
Community content is available under CC-BY-SA unless otherwise noted.