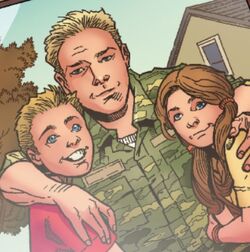 Michael Walker was born and raised in the small town of Custer's Grove, Georgia. His younger brother John Walker looked up to Mike and hoped to become a hero like him one day. He served as a US Army helicopter pilot. Michael Walker was a soldier in the US Army who served in Siancong. After he fell in battle, John joined the military to follow in his footsteps.[1][2][3]

Like this? Let us know!
Retrieved from "https://marvel.fandom.com/wiki/Michael_Walker_(U.S.Agent%27s_Brother)_(Earth-616)?oldid=6541277"
Community content is available under CC-BY-SA unless otherwise noted.