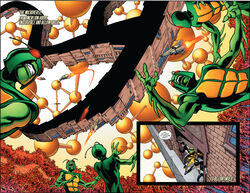 A Microverse is a dimension that can be reached from the Earth dimension by shrinking with Pym Particles and thus compressing the person's matter to a certain point, thereby forcing it through an artificially created nexus into the other universe. The Microverses were once erroneously believed to exist within atoms. They are all described as parallel dimensions, rather than universes within universes.[2][3][4]

The Microverse, the region usually referred to by that name, is a specific realm created by Prince Wayfinder, a time traveler from the future of Earth-7614. He and his followers travelled back in time 65 million years ago to Earth-616 using the Sword in the Star as a home for his displaced people. It is held together by the Enigma Force.[5][6]

The microworld of Mita was terrorized by the tyrant named Togaro who sought to take over that world. The rulers of Mita sent their daughter Dianna to Earth where she was adopted and grew to adulthood. Togaro learned of Dianna's fate in 1942 and launched an attack on Earth, drawing the attention of wartime heroes Captain America and Bucky.[7] Following Togaro into the Microverse, Cap and Bucky ended his empire, and Togaro was slain, but not before the villain could send Mita hurtling into its sun. Tragically, a ship full of Mitan refugees ended up dying as well when their escape ship crashed. The only surviving Mitans are Dianna, Ailma who escaped to Earth,[8] and a number of Togaro's troops who were captured on Earth.[7] The fate of these individuals are unknown at this time.

During one of his earliest battles against the Fantastic Four, Dr. Doom was exposed to a shrink ray and seemingly shrank out of sight.[9] In reality, he was transported into the Microverse where he appeared in the star-system of Sub-Atomica. There he conquered the world of Mirwood and used shrink rays to get revenge against the Fantastic Four. When the FF followed him to the Microverse Doom captured the quartet and attempted to give them as slaves to the Lizard Men of the planet Tok. The Fantastic Four were rescued by the size-changing hero Ant-Man and they crushed Doom's empire forcing Doom to flee back to Earth, and the heroes followed quickly after him.[10] Another threat from the Microverse came from the world of Traan when the Psycho-Man attempted to conquer the Earth. Psycho-Man was stopped by the Fantastic Four, the Inhumans, and the Black Panther.[11] When the Silver Surfer found himself exiled on Earth,[12] his master Galactus came to utilize him again. Wishing to remain free, the Surfer briefly hid in the Microverse.[13] With the Earth at risk of being consumed, the Fantastic Four traveled to the Microverse to recover the Surfer, the Surfer eventually relented and returned to Earth and helped Galactus.[14] Before the FF could return themselves they were attacked by the Psycho-Man again, who was convinced to let them go when he was made to realize that if Galactus destroyed Earth, the Microverse would be destroyed along with it. However, Galactus was defeated in their absence.[15]

In recent times, much of the Microverse was conquered by the despot Baron Karza, and more recently still the realm was somehow merged with a number of other supposedly 'sub-atomic' universes including Sub-Atomica (the realm of the Psycho-Man) and Tok (which is home to the Lizard Men of Tok) due to an unseen conflict between Baron Karza and Thanos. The Microverse is separated from the upper dimensions by the Spacewall, a barrier protected by the Time Travelers, though it was once accessible via other means including the Prometheus Pit, a portal created at the Human Engineering Life Laboratories (HELL) by Professor Prometheus.[citation needed]

Like this? Let us know!
Retrieved from "https://marvel.fandom.com/wiki/Microverse?oldid=6438732"
Community content is available under CC-BY-SA unless otherwise noted.