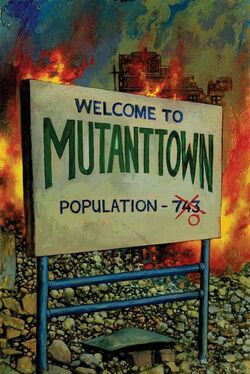 The rise in Manhattan's mutant population, coupled with racism among normal humans, led to mutants forming their own community in a ghetto established in the Alphabet City area of the East Village neighborhood of Manhattan.[2] District X was the official title for the region; however, the region was more commonly referred to as Mutant Town. Mutant Town was very similar to, and served much the same purpose as, other minority ghettos in New York City like Chinatown, Harlem, Little Italy, or Greenwich Village. Soon the neighborhood was primarily populated by mutants, although some humans lived there as well.

The neighborhood was poor, overcrowded, and violent, with a high rate of crime, narcotics use, prostitution, burglary, and warring mutant gangs. It was once described as having the "highest unemployment rate in the United States, the highest rate of illiteracy and the highest severe overcrowding outside of Los Angeles."

Gang wars, such as the one between Daniel Kaufman and Frankie Zapruder, were frequent.

Many of its inhabitants possessed physical mutations that prevented them from blending in with human society. It also had a large underground population, inhabiting tunnels beneath the neighborhood similar to those of the Morlocks years before, or the Tunnel Rats.

Mutant Town was particularly notorious for the street drugs Kick, Toad, and MGH, sold by dealers such as Jazz and Charlie Hustle, or by Shaky Kaufman's and Filthy Frankie's gangs.

Despite the poverty and crime, Homo superior culture thrived here more than anywhere in the world outside of Genosha. Mutant Town quickly became a cultural center and population hub for a disenfranchised minority.

There was a range of mutant-owned businesses, clubs, and restaurants, including The Double Helix restaurant, X-Factory clothing, Café Des Artistes, Frankie's lounge, The Power Plant bar, and Mutatoo tattoo parlor.[3] Mutant bands such as Sentinel Bait, Juggernaut and Cerebrastorm,[3] along with nightclubs such as Daniel's Inferno, Wildkat Klub, Shakespeare's, and Wannabees created a vibrant, mutant-oriented nightlife. Many mutants used to work at such night-clubs, using their mutant powers or appearances, such as Lara King, Lorelei Travis, or Patricia Hamilton.

Mutant artists began to emerge, such as Nemesio Pietri, while mutant fashion designers like Jumbo Carnation became celebrities and mutant clothing line like BuFu were founded.

When the insane human mutate (who was disguised as mutant) Wanda Maximoff altered the world to create a mutant paradise where Homo Superior ruled, District X was transformed into a rich, exclusively-mutant neighborhood named Mutopia X. Conversely, during the same time, Hell's Kitchen became a human ghetto called Sapien Town.[4]

The residents of Mutant Town and of the world suffered the effects of M-Day, and most of them were stripped of their mutant abilities. The majority of the remaining powered mutants were moved to a relocation camp on the grounds of the Xavier Institute. Some former mutants remained in District X, with many, such as Quicksilver and Rictor, suffering from depression and alienation. The district became known as the Middle East Side, and lost many of its distinctive characteristics. It became increasingly depopulated as former mutants sought to live normal lives.

X-Factor Investigations stayed opened and operating in Mutant Town, frequently dealing with the aftermath of the M-Day and its effects on the local community. During the Civil War and debates over the Superhuman Registration Act, Jamie Madrox and his team declared that Mutant Town would be a sanctuary for superheroes pursued by the government.

Later, Mutant Town was besieged by X-Cell, a terrorist group composed of former mutants who blamed the United States government for the loss of their powers.

After the birth of the first mutant since M-Day, the neighborhood was briefly taken over by Arcade, who was working for an ex-Purifier, Taylor.[5]

Mutant Town was finally destroyed as a 'back-up' plan by Arcade following his defeat. A series of explosions incinerated much of the neighborhood, with Arcade's force fields preventing fire-fighters from entering the area until the entire district had been destroyed.[6] Later, Valerie Cooper announced that the ruins would be demolished and replaced with suburban housing, and that "in a few decades, no one will even know that this used to be called Mutant Town."[7]

At one point, Jubilee worked for a clinic near or in the former Mutant Town to help depowered mutants cope and acclimate to life without powers. Because the clinic had been attacked on a few occasions, and depowered mutants were ending up dead or missing, Jubilee asked Wolverine and X-23 to help investigate.[8]

Retrieved from "https://marvel.fandom.com/wiki/Middle_East_Side?oldid=5836356"
Community content is available under CC-BY-SA unless otherwise noted.