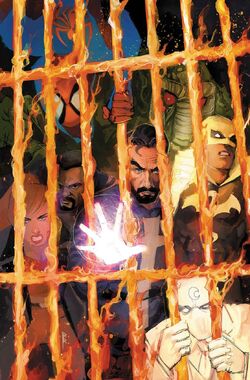 Nine beings with ties to the occult were drawn together by Doctor Strange to battle Lilith and her demonic children, the Lilin. The various individuals that comprised the initial group had already had their own brushes with the Lilin,[8][9][10][11][12] but most were unaware of the full magnitude of their predicament until Strange magically drew them together to halt an incursion of Lilin in Greenland. The disparate warriors were not formally grouped at the time, and some of their number were openly hostile to certain others, only working together out of a need to deal with the more imminent threat posed by the demons. Despite this, Strange still named them collectively as the Nine after sending most of them away in the aftermath of the battle.[13]

The Nine battled Lilith and her Lilin on multiple occasions. They were forced to battle fellow member Blade when he was transformed into 'Switchblade' by the Darkhold. They also investigated Spider-X.[14]

After the final battle with Zarathos the remaining members were branded as the Order of the Midnight Sons.[15]

A new Midnight Sons team was briefly formed by Morbius to hunt zombies that had infiltrated their Earth from another reality to try and spread their Hunger Virus.[16]

When Doctor Strange used magic to rebuild Las Vegas, Hotel Inferno emerged with it. The tower's influence began to change the citizens of Las Vegas,[17] making them act on their very base instinct and impulse. In turn, for even the lesser of sins, their souls were taken by Mephisto.[18] It also engulfed the heroes present at the scene, namely Falcon, Captain Marvel, Thor, Hawkeye and Black Panther, who were turned into Ghost Riders.[17] Bats, the ghost of Stephen's talking dog, sought Wong's help to assist Stephen. Wong decided to summon to Strange's aid a new Midnight Sons: Blade, Mr. Knight, Elsa Bloodstone, Doctor Voodoo, Man-Thing, Iron Fist, and finally Ghost Rider to lead them all.[17]

Equipment: The "Brand" of the Midnight Sons is a small cross with a sharp downward point. It was seared into the arms of an earlier Order of the Midnight Sons in ancient times, and began to appear on some of the modern-era Midnight Sons as they battled Zarathos. The purpose of the brand is to summon its wearers back together in times of great need, and is said to "hurt like the Devil himself" until the summons is answered. The brand otherwise remains invisible until it is needed. Frank Drake was turned away from being branded as he was deemed to be too human at the time.[15]
Transportation: *Mystical teleportation - A common means of transporting the group instantaneously when needed, and sometimes for moving them between dimensions.

Retrieved from "https://marvel.fandom.com/wiki/Midnight_Sons_(Earth-616)?oldid=5561499"
Community content is available under CC-BY-SA unless otherwise noted.