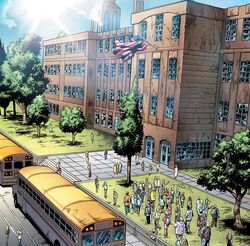 The school has been attended by Peter Parker a shy, unassuming high-school student, Peter prefers the company of his teachers to that of his classmates, who call him "Midtown High's only professional wallflower." A fellow student Flash Thompson was jealous of Peter's academic schools began bullying him calling him "Puny Parker".[1] He along with his friends Liz Allan, Sally Avril and Seymour O'Reilly took it upon themselves to torment Peter when they could. But thing began to change when he was bitten by a Radioactive Spider.[2]

However Peter was so wrapped in his own secret world as Spider-Man he was almost always rude to them even when they tried to be his friend, such as Sally Avril who liked to call him "Petey" The Human Torch gave the Midtown High School students another demonstration of his newly restored powers.[3] She liked Peter but he refused a date with her because he was busy dealing with Sandman. After defeating him at the school he tried to ask Liz out but she refused fed up with him ignoring her.[4] Liz developed a crush on Spider-Man, blowing off both Flash Thompson and Peter Parker because she believed the costumed hero would call her.[5] In the school yard Flash threw a ball at Peter which he caught with ease. [6]

When he joined S.H.I.E.L.D., his fellow teammates of S.H.I.E.L.D. training program Iron Fist (Danny Rand), Power Man (Luke Cage), White Tiger (Ava Ayala) and Nova (Sam Alexander) joined the school as well, in order to make them live a standard life, and Phil Coulson was appointed Principal, for S.H.I.E.L.D. to keep an eye on the recruits.

As villains thought Spider-Man was part of the student body, the school was often attacked.

On Earth-TRN207, Midtown High School had been converted into a strip mall. During his displacement to this reality, the Peter Parker of Earth-616 visited his former school and bought an ice cream cone, only for a chrono disturbance to pull him away. The Avengers later investigated the scene and found that the ice cream cone had transformed into a temporal bomb.[8]

Like this? Let us know!
Retrieved from "https://marvel.fandom.com/wiki/Midtown_High_School?oldid=6452194"
Community content is available under CC-BY-SA unless otherwise noted.