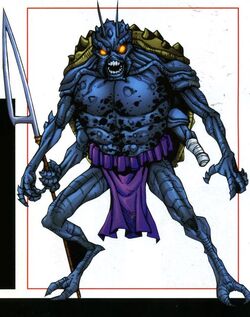 You don't understand. He taught me never to stop making them pay. And I lost my whole world. And now my whole species is about to :kik: die out. But this :kik: today? I don't do this out of anger. I just have something to :kik: fight for again.

Miek was a member of planet Sakaar's insectoid race known as "Natives". When he was young his father and most of his hive were attacked and killed by local Imperials, forcing Miek to flee underground. He was accidentally rescued, as an outcast slave, during Hulk's battle with the Red King.[4] Soon after, the Warbound escaped with Miek secretly leading them to the place where his father was killed.[5]

The Warbound then aided him in securing his revenge. Miek and Brood, who had formed a connection due to their insect nature, freed Miek's brothers and added the Warbound to his Hive. Within a short time he underwent a metamorphosis and evolved into a giant heavily armoured "King" version of his race.[6]

Miek located one of the last Queens of his race, at an egg farm at which the Warbound were hiding. Unfortunately for Miek, and his species, the Queen was consumed by a Spike infection and had to be killed.[7] Miek then led the Warbound in Hulk's place while Hulk, Hiroim, and Caiera attempted to obtain the allegiance of Caiera and the Shadow People.[8]

Following the death of Caiera Oldstrong, Miek and the rest of the Warbound accompanied the Hulk back to Earth, where they pledged to aid him in a quest of vengeance against those responsible for the Hulk's forced exile.[9]

On Earth, Miek was one of the most vocal in encouraging the destruction of the planet in revenge for what was done.[10] By the end, it was revealed that Miek knew all along that the Illuminati were not responsible. Red King loyalists had planted a damaged warp core on the Hulk's ship hoping it would kill the Hulk. Miek did not tell the Hulk hoping it would encourage the Hulk to keep destroying. Enraged, the Hulk and No-name nearly killed Miek.[11] After the Hulk's defeat Miek was captured by S.H.I.E.L.D. and placed in Wonderland and relayed information about the Warbound to help recapture them.[12]

During the Chaos War, the dimensional boundaries around the Negative Zone were breached, allowing Miek and all the other bug inhabitants to spill out and enter Earth. Miek was recruited by the Chaos King to inflict as much chaos as possible. Miek pledged his loyalty toward the Chaos King as his master's goal of destroying everything the same as the Hulk's once was.[14]

Miek led an army of Prison 42 prisoners against Amadeus Cho and Galactus as they attempted to complete a gateway to the Continuum universe to save what remained of creation. Cho failed to reason with Miek as Miek refused to take anything Cho said seriously. Miek was about to kill Cho when the final battle between Hercules and the Chaos King caused an earthquake that allowed Cho to strike a distracted Miek with his Golden Mace. Miek later fled.[15]

Miek retreated to the Savage Land outpost of New Imperia after his defeat. His contact with Chaos King caused Miek to develop a hermaphroditic physiology and began laying eggs. It also caused to grow larger and stronger than before. He kept his young alive using the bodies of Sakaaran refugees. Hulk later arrived to the Savage Land after he was asked to help deal with Miek by Ka-zar. After learning of the return of the Hulk, Miek swore he would make him die by his hands. Miek captured Hulk and used his body to help feed his young. Hulk eventually regained his wits and tried killing Miek's children. He was prevented by his son Skaar who had promised to protect Miek's children. When Miek tried to make Skaar fight his father, Hulk chopped one of Miek's arms and punched him through a volcano and into a field of ice. Hulk tried to save Miek, but Miek refused to be saved by Hulk and let himself drop to his death into the ice.[16]

Some experience in the use of spear and swords

Like this? Let us know!
Retrieved from "https://marvel.fandom.com/wiki/Miek_(Earth-616)?oldid=6103705"
Community content is available under CC-BY-SA unless otherwise noted.