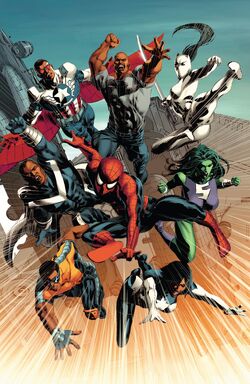 There's a word we use. Everyone who's ever served as an Avenger, we've spoken that word. Hell, it's a competition to say it. To shout it. Because it is that sacred to what we are and what we do. And that word is assemble. When we come together, we're stronger than when we stand apart. That's what it's always been about. We come together to fight what can't be fought alone. To defeat those things in the world that would drag us down. That would make us lesser. Those things no single hero can withstand. And by we? I mean all of us. When we make the effort to help those who need us-- to help each other, to be there for each other -- we are all Avengers. You are Avengers.

When the Avengers left the Earth in order to fight the alien race known as the Builders, the Mad Titan Thanos took advantage of the situation and sent his Black Order to raze the world.

When Proxima Midnight and Thanos' goons started wrecking havoc in the streets of New York, a group of heroes assembled to fight them. These heroes were Luke Cage, Spider-Man, Spectrum, and the mysterious Spider Hero.[2] While Proxima was called upon by Thanos to return to him, his other general Eboy Maw had taken control over Doctor Strange and summoned Shuma-Gorath.[3] White Tiger, Power Man and Blue Marvel joined the brawl against the monster, ultimately turning the tide and emerging victorious. The dust settled, and Cage decided to officially turn the improvised team into the Mighty Avengers.[4]

Once Thanos' invasion was thwarted,[5] the Mighty Avengers established their headquarters in the remodeled Gem Theater, and also established a hotline, with the purpose of helping everyone and anyone who needed them.

The team's next adventure came to the Mighty Avengers when Kaluu contacted the Spider Hero (who would subsequently assume the mantle of Ronin) to inform him the Deathwalkers were going to get into the fallen Attilan, the Inhuman city partially sunk in the Hudson river. While a portion of the team headed to Attilan, Luke Cage and his wife Jessica Jones dealt with an attempted hostile take over from Spider-Man (who was the villain Doctor Octopus controlling the hero's body at the time).[6]

While She-Hulk helped Luke and Jessica fend off Spider-Man's forces, the Mighty Avengers encountered a Hellhound sent by Lichidus of the Deathwalkers, who wanted to recover the Lost Talisman of Kamar-Taj from Attilan. With Cortex Inc. operative Quickfire was caught in the middle, the Hellhound was defeated, and Ronin escaped with the Talisman.[7]

Soon after helping the Ava Ayala control the spirit of the White Tiger in Blue Marvel's underwater base, the Mighty Avengers found themselves facing an attack from Blue Marvel's son, the Doctor Positron, who blamed his father for his brother's disappearance into the Neutral Zone, and attempted to open a portal to said dimension and rescue him, but failed.[8]

At the time the Avengers were investigating the murder of Uatu the Watcher, the minions of the Deathwalkers were able to subdue Blade after weeks of chase, kidnapping him and taking the Talisman of Kamar-Taj from him.[9]

Even though the Mighty Avengers located Blade and arrived to help him, the Deathwalker's legion of servants provided a distraction so the heroes couldn't get to Deathwalkers before they could finish their ritual. The successfully-finished ceremony merged them together into the Deathwalker Prime, a creature with control over the four elements, thus power over the fifth: the spirit, which would be the key for it to destroy humankind.[10]

Some of the members of the Mighty Avengers heeded the call for help to defeat the Red Onslaught in Genosha. The villain was ultimately defeated when Doctor Doom and Scarlet Witch cast an inversion spell that flipped the villain's moral axis. However, the spell accidentally affected the people in the scene as well.[12]

Luke Cage became extremely materialistic, going as far as having business affairs with Jason Quantrell of Cortex Inc., and Captain America became an fascist who violently beat up criminals. When the new personalities of these heroes clashed with their teammates, they joined the Axis of other inverted Avengers.[13]

The Axis confronted the Mighty Avengers, with the inverted Iron Man demanding them to disband due to their use of the Avengers trademark. After a furious battle, Iron Man decided to back off, pretending to the public that the confrontation had been a scheme of the Machinesmith.[14]

After the effects of the inversion had been reversed, Luke Cage pretended to still be his abnormal self in order to keep making business with Cortex Inc. to infiltrate the company and discover its secrets.[15] When Luke and Jessica Jones confronted Quantrell, he revealed himself to be a member of the evil and powerful Beyond Corporation.

At the same time, Power Man and White Tiger had followed the trail of the murder of Gideon Mace, who had been turned by Cortex Inc. into a monstrous creature along with Quickfire.[16] Meanwhile, Blue Marvel had been cryptically warned by his son Kevin from the Exo-Space (a dimension outside of reality) of a threat "from beyond."

Captain America, She-Hulk and Kaluu heeded a call for help from Power Man, who had been infected and turned into a similar monstrous creature shortly after White Tiger suffered the same fate. Luke and Jessica were teleported to the vacuum of space by "Quantrell," but they were rescued by Blue Marvel a few moments later. Once they were safe, they warned their teammates about Beyond Corporation, causing Blue Marvel to realize the meaning behind his son's message. Spectrum took the revelation of the threat of Beyond personally, as she had been manipulated by Beyond Corporation a few years before.[17]

While Captain America held the line against his fellow teammates, who had been all turned into monsters, Spectrum confronted "Jason Quantrell" and distracted him for long enough that Blue Marvel was able to open a portal to the Exo-Space and send him back. Once "Quantrell" left the universe, the monstrous infection that affected the rest of the team disappeared.[18]

When Steve Rogers and the Avengers set out to hunt down Iron Man and the Illuminati for hiding the the phenomenon of the incursions from the rest of the world, he reached out to the Mighty Avengers, who agreed to help him in capturing the Illuminati.

After weeks of attending the mass-panic caused when the existence of the incursions was made public knowledge, the Mighty Avengers were deployed in Spain, where the Illuminati had been pinned down by the Avengers. The squabble was interrupted by the Invisible Woman, who convinced the different parties to reach a middle ground and start working together.[1] Adam Brashear used the opportunity brought by the truce to scold Mr. Fantastic and Black Panther for their actions with the Illuminati.[19]

When the final incursion loomed, the Mighty Avengers were forced to close their headquarters, due to the inverted Tony Stark having used his team of lawyers to sue Cage for using the "Avengers" name. The former members of the team were called in to fend off the forces of the incursive Earth. Spectrum engaged in a plan to destroy the other Earth by turning into hard light and crashing into it at light speed. However, she hesitated when she was about to hit its surface after seeing a group of innocent kids playing, allowing the Maker of said Earth to capture her.

During the final hour, the members of the Mighty Avengers spent the last time in different ways. Captain America continued defending the Earth against the enemy forces, Iron Fist rescued civilians caught in the middle of the combat, She-Hulk helped strike against the other Earth, Power Man visited his family, White Tiger patrolled the city beating up criminals, Kaluu drank tea with Wong, Blue Marvel and his son worked in their lab trying to save the Earth, the Support Team answered the hotline comforting whoever called, and Luke Cage and Jessica Jones helped a homeless shelter.[20]

Like this? Let us know!
Retrieved from "https://marvel.fandom.com/wiki/Mighty_Avengers_(Cage)_(Earth-616)?oldid=5839456"
Community content is available under CC-BY-SA unless otherwise noted.