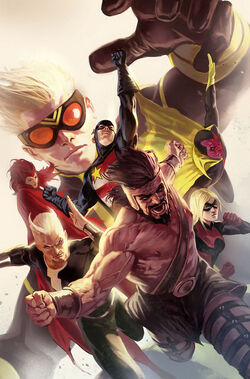 The world needs the Avengers. The best of the best. The best and the brightest. Symbols. Icons. It's a time of healing. It's a time to tell people we're looking out for them.

The Mighty Avengers were formed in the wake of the Superhero Civil War as the New York unit of the 50-State Initiative. They were selected by Tony Stark, then Director of SHIELD, from members of his Pro-Registration Superhero Unit to form "the perfect team of Avengers." Stark's aim was that, though the Initiative was meant to cover each state, the Mighty Avengers would serve the world. Though he was an active team member, Stark's obligations both as Iron Man and as Director of SHIELD meant he was already strained as it was. For this reason, he appointed longtime Avenger and former super-agent Ms. Marvel to act as field commander.[1]

Unlike the previous rosters of the Avengers which were assembled by chance, Stark and Ms. Marvel picked the line up from the registered heroes at their disposal. Aside from Iron Man, the only other founding Avenger on the roster was wealthy fashion icon Janet van Dyne, the Wasp. Following Iron Man from the New Avengers in the post-Civil War split was the troubled powerhouse known as the Sentry. Two other former Avengers rounded out the roster, in the form of Black Widow, the former Russian spy and ex-lover of Stark's, and Wonder Man, the ex-industrialist turned superheroic actor and stuntman. Ares, the Olympian God of War turned anti-hero, completed the roster. Ares was selected because it was felt that the team needed "a Thor", and "a Wolverine". [1]

Their first mission, just after their formation, brought them into conflict with the Mole Man. Immediately thereafter, a nanovirus courtesy of Ultron took control of Iron Man's armor, molding it into a new "female" form for its creator. Ultron went on to seize control of Stark Industries' weather satellites. It was only with the aid of Starktech 9, a robotic version of the original Iron Man armor, that the Avengers won the day. Another early venture, on the heels of the death of Captain America, saw the team, sans Iron Man, venting their anger on Tiger Shark and a host of summoned sea-beasts.[4][5]

The Mighty Avengers clashed with their sometimes rivals, Luke Cage's unregistered New Avengers.[6][7]They were forced to join with this same team, along with the Fantastic Four, to stave off the Hulk and his allies, to varying degrees of success. Also, the hero they believed to be Spider-Woman, already a woman of several loyalties (a mole within both SHIELD and HYDRA for the fugitive Nick Fury, in addition to Avengers duties), left the New Avengers to join the Mighty Avengers.[8]

Next, the New York Initiative was confronted by an invasion of the Symbiotes, the same alien race that had spawned Venom and Carnage. These alien creatures rapidly began attaching themselves to people throughout Manhattan, including Wasp, Black Widow, and Spider-Woman. After Iron Man developed an antivirus, he traced the attack's origin not to outer space, but to Latveria. The Mighty Avenger travelled to Latveria and apprehended its monarch, Doctor Doom.[9]

After it was discovered that a Skrull had posed as Elektra, Tony Stark recognized this as a sign of some kind of Secret Invasion. Although all Skrulls had shapeshifting powers, this one had proven especially difficult to detect. Stark called in Dr. Reed Richards and Dr. Hank Pym. As Richards and Pym were examining the corpse, Pym revealed that he too was a Skrull, firing a weapon at Reed that reduced his elastic body into a puddle of goo.

Meanwhile, a Skrull ship crash-landed in the Savage Land. Both teams of Avengers responded. The ship opened, however, revealing a contingent of 15 individuals dressed in old-style costumes of existing superheroes claiming to be the genuine articles, and to have just escaped Skrull imprisonment. Spider-Woman was discovered to have been none other than Veranke, Queen of the Skrulls. Not only the Avengers were affected, but the Initiative, SHIELD, and more.

During the climactic battle with the Skrulls, the Mighty Avengers fought alongside a slew of comrades. The Skrull posing as Hank Pym had offered the Wasp a dose of the serum which Pym had used to grow to immense heights as Giant-Man and Goliath. As it turned out, however, this was a trap: the serum turned her into a living bomb. As the Wasp was about to explode, killing everyone nearby, her longtime comrade Thor was forced to kill her to save everyone around her. At the same time, he promised to avenge her. During the fighting, Norman Osborn killed Queen Veranke. [citation needed]

After the battle, the blame for the Secret Invasion was placed mainly on the shoulders of Tony Stark. SHIELD was disbanded, and was replaced with the new Thunderbolts Initiative headed by Norman Osborn, the Green Goblin. Osborn was secretly a member of the Cabal. Everyone replaced by the Skrulls was found to be alive and well. With the Wasp dead and Tony fallen from grace, the original lineup of the Mighty Avengers disbanded. Ms. Marvel joined the New Avengers. The Sentry and Ares joined Osborn's Avengers. [citation needed]

Loki took the form of Scarlet Witch, and manipulated a new group of Avengers to form in order to embarrass Norman Osborn. The Hulk briefly returned to active duty as an Avenger for the first time since he left the team after having helped found it. Free from Skrull captivity, fellow founder Hank Pym returned to active duty as the new Wasp, struggling to come to terms not only with the post-Civil War world, but with the death of the love of his life, the original Wasp. Two Young Avengers joined the team, the new Vision and Stature, as well as Jocasta, all of whom were results of different aspects of Pym's legacy. The muscle-bound Hercules, Amadeus Cho and US Agent rounded out the roster.[citation needed]

The team gathered at Wundagore Mountain. Iron Man arrived on the scene, hoping to take control of the team. The united forces of the Avengers, aided by who they believed to be Wanda, quashed the threat of Chthon, when he returned by possessing the body of Quicksilver with the help of Modred.[10]. Hank Pym led the team to victory and Quicksilver was freed from his demonic control. [citation needed]

The Mighty Avengers become an international team by the international organization G.R.A.M.P.A., and were authorized to work outside of the United States. After aiding the team against numerous villains, Quicksilver was accepted as a member. Quicksilver hoped to use the Mighty Avengers to reunite with his sister.[11] In escaping H.A.M.M.E.R. agents, Jocasta inadvertently untethered the "PymPocket" base from reality. Henry Pym contacted Reed Richards, hoping to borrow a device that had been left in the Fantastic Four's care by the late Bill Foster. When Reed refused Pym decided to have his team break into the Baxter Building and steal the device. Pym was successful, and eventually convinced Richards to hand the device over to his Avengers. Pym managed to move the Pym Pocket to a new dimensional location. The degradation of the dimensional gateways required Jocasta to be voluntarily integrated into the system in order to hold it together. The end result was the creation of the Infinite Avengers Mansion, their new base, which would enable them to respond to any crisis.[citation needed]

Quicksilver and U.S. Agent were sent to China to determine a possible alliance between the communist government and the Inhumans. But they soon found out that it is the actually an incursion caused by the exiled Inhuman king known only as the Unspoken. The Unspoken, outcast from his people for removing the Slave Engine and Xerogen Crystals from Attilan, he decided to redeem himself by using the Engine and crystals to convert all of humanity into Alpha Primitives.

Quicksilver attempted to contact his team for help. However, Loki severed communications, fearing that his belief that she was his sister would put a wedge in her plans and hoped that Quicksilver would die. Stature caught her in the act but was magically gagged to prevent her from saying anything bad about "the Scarlet Witch". Therefore, she invited her fellow Young Avengers into the Mansion and tricked them into summoning Loki/Scarlet Witch. Her tolerance for Stature lost, "Wanda" decided to kill them all. However, Clint Barton, the former Hawkeye, had sneaked into the Mansion and determined that Loki was not the Scarlet Witch by kissing her. Loki was forced to flee in order to escape exposure and cast a ward to prevent being summoned again. This canceled out the spell on Stature, who alerted everyone to what's happened in China.

The Mighty Avengers gathered the Avengers Resistance and New Avengers to deal with the Unspoken. They managed to defeat him by turning a chronal ray against him, aging him to the point isn't a threat.

After dealing with civil unrest on the Kree planet Hala, ruled by the Inhumans, the Mighty Avengers returned to Earth, where they continued their global peacekeeping efforts. Their continued achievements overshadowed Osborn, who called together his Cabal to destroy the Mighty Avengers once and for all. Only Loki, back in his male form, responded to the call. He manipulated Osborn into craving more glory. Then, secretly, Loki made one final test for Osborn, by having both Avengers teams pitted against the Absorbing Man. He pulled strings in the fight and portrayed Osborn as a hero, who then uses his authority to strip U.S. Agent of his rank. However, Pym saw him in the crowd. He then set up a machine designed to trap Loki. Quicksilver wanted to divulge the location of his sister Wanda from him, to which the Trickster God answers that he doesn't know, but Quicksilver doesn't believe him. After the arrival of Thor, who was summoned by Loki and explaining that it was his half-brother who was deceiving them, Pym attempted to recruit Loki into the Mighty Avengers. This was the last straw for everyone and thus, the Mighty Avengers disbanded.

Pym, U.S. Agent and Quicksilver joined forces with Hercules, along with the New Avengers, to stop his step-mother Hera's plan to destroy the universe. Unfortunately, when Hercules was seemingly killed trying to save Earth, the impact was so hard on his comrades that they truly went their separate ways, thus finally disbanding the Mighty Avengers. [12]

When Black Order member Proxima Midnight asked Thanos for permission to attack New York, he agreed to her request. At the start of her attack, a new group of Mighty Avengers, led by Luke Cage, arrived and engaged Midnight in combat.

Like this? Let us know!
Retrieved from "https://marvel.fandom.com/wiki/Mighty_Avengers_(Initiative)_(Earth-616)?oldid=6443010"
Community content is available under CC-BY-SA unless otherwise noted.