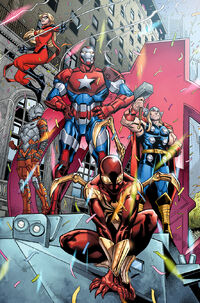 The Mighty Avengers were a team of super heroes hand-picked by President Stark after the end of the Civil War. They were: Captain Marvel (Carol Danvers), Iron Spider (Natasha Romanov), Penance, Thunderstrike, and President Stark himself as the Iron Patriot.

While attending a presidential parade commemorating the Registration Day, the Mighty Avengers were forcefully taken to Battlerealm by Maestro, the Hulk from an alternate reality. The Mighty Avengers' memories were altered by Maestro, who used the Iso-Sphere to do so, to make them think they were still on their home reality hunting down unregistered superhumans, while in reality they were confronting a group of unwilling contestants of Maestro's Contest of Champions.[2]

Their battle was interrupted by the arrival of the Thunderbolts, who had been sent to Battlerealm to rescue President Stark and his Mighty Avengers. However, while everyone was distracted, Bullseye (one of the renegade champions) killed Penance by throwing one of her twin sai at his throat. She was in turn killed in retalation by Thunderstrike, who was then killed by another renegade champion, Ares.

An all-out battle between the three groups soon broke out, only ending when Iron Patriot killed the leader of the Thunderbolts, Steve Rogers. A furious Invisible Woman attacked Iron Patriot, destroying his armor from within using a expanding force field, revealing an Infinity Stone in Stark's chest. Stark revealed that was the Reality Stone, and that he had been using it to subtly manipulate reality in his favor back in their home reality. He tried to use it to subdue his enemies as well as his own allies, and make them forget what he had revealed to them, but it didn't work. Stark was then crushed by Maestro, who revealed to him that the Infinity Stones just worked on their native universe before proceeding to finish him off.

Maestro challenged the remaining contestants, as well as his allies, to defeat him, but they were no match for him. However, Maestro's victory was cut short with the help of two contestants he believed dead: Stick from Earth-616 and the Sentry of Earth-1611. While the rest of the contestants were fighting Maestro, Outlaw snatched the Iso-Sphere from him and wished the contest to be over. The Iso-Sphere was destroyed, the contestants were teleported to whichever place they wanted to be, and Maestro was sent to a cell in the Collector's museum.

While the contestants native from Earth-616 were sent back to their reality, the remaining members of the Avengers, the Thunderbolts and the Sentry decided to stay behind in Battleworld to protect its deposit of Iso-8 from any interdimensional invaders who attempted to get their hands on it, and thus was born the Civil Warriors.[3]

Retrieved from "https://marvel.fandom.com/wiki/Mighty_Avengers_(Initiative)_(Earth-TRN619)?oldid=4134656"
Community content is available under CC-BY-SA unless otherwise noted.