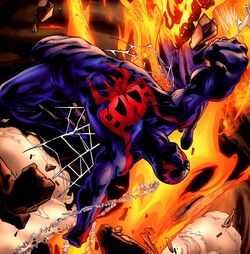 You have his abilities, and you will take his name in time. But you must be yourself in the process.

Miguel O'Hara was just a teenager who got his powers from energy from the Time-Storm and spider DNA and out for the first time as Spider-Man and didn't know how to use his powers completely. Though he was nearly killed, Miguel O'Hara managed to rescue Peter from The Scorpion, and the two heroes took down the freak of science. Later Miguel fought the Human Torch, an Atlantean with control over fire; Relur soon offered to train Miguel in the art of combat.

He was killed when Morlun began to hunt down the various Miguel O'Hara Spider-Men across the Multiverse as part of the Great Hunt. Morlun attacked Miguel at his home while he was sleeping, consuming his essence, before overpowering and murdering his father, George. Miguel's death was felt by both the Miguel O'Hara harbored in Earth-616 and Miguel who had joined the Exiles.[1]

Spider-Man 2099 has powers similar to the modern day Spider-Man. He has superhuman strength, agility, durability, speed, reflexes, eyesight. His healing abilities are also heightened. But, he does not have a healing factor. He has spinnerets in his forearms able to shoot organic webbing out of his wrist. Miguel also has retractable talons that come out of his fingers and toes that allow him to climb any surface. They can also be used offensively, they are able to cut and grab most objects. He also has a spider sense.

Like this? Let us know!
Retrieved from "https://marvel.fandom.com/wiki/Miguel_O%27Hara_(Earth-96099)?oldid=6464208"
Community content is available under CC-BY-SA unless otherwise noted.