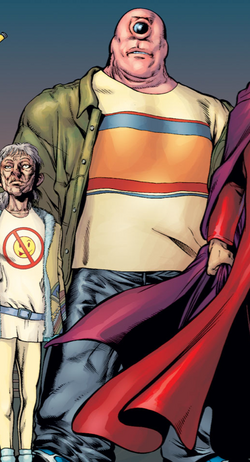 The young mutant known as Basilisk grew up with much persecution due to his abnormal appearance, and as such developed a very aggressive personality. Having lower than average intelligence, Basilisk was quick to anger, but his rage was just as easily quelled.[3]

After the X-Men went public, Basilisk became a student at the Xavier Institute. He was placed in Xorn's Special Class. On a camping trip with the Special Class, Basilisk was attacked by the U-Men, humans who hunted mutants for their organs. Basilisk saved the class from one of the U-Men, but only after Ernst told him that No-Girl would agree to date him.[3]

Shortly afterwards, Xorn "revealed" himself as Magneto, though he was in fact merely impersonating him. Basilisk joined his Brotherhood. Unfortunately, during Xorn's assault against New York City, he struck out at Basilisk, accidentally killing him.[4]

Photokinesis: In his eye socket rested a camera-like device that allowed Basilisk to control his superhuman mutant ability to emit a pulse of high-frequency strobe light directly from his brain. This light completely paralyzed any sentient being that looked at it, causing them to fall into a rigid, fascinated state akin to a deer caught in the headlights of a car. The length of this effect varied depending upon the strength of will of whomever Basilisk stared at.

Like this? Let us know!
Retrieved from "https://marvel.fandom.com/wiki/Mike_Columbus_(Earth-616)?oldid=5828718"
Community content is available under CC-BY-SA unless otherwise noted.