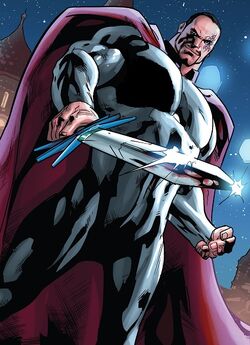 During a mission as a cosmonaut for the Soviet Union, Mikhail Nikolaievitch Rasputin (Russian: Михаил Николаевич Распутин) was pulled into a dimensional rift, where he alone of all his crew survived. He was taken in by the locals, fell in love with a princess, and married her. His father-in-law being something of a tyrant, Mikhail found himself embroiled in political conflicts that led to a civil war. During the fighting, the rift was opened, and only Mikhail's powers could close it. He did so, but the backlash killed hundreds of his people, including his wife.[1]

Overcome by grief, Mikhail exiled himself into the desert, where he remained until the X-Men, with his brother Colossus, traveled through the re-opened rift to try and seal it. Eventually the team and Mikhail connected, and using Sunfire and Iceman to control the energy backlash, Mikhail and the team were able to close the rift and return to Earth, without any loss of life.[2]

Once back, however, Mikhail found it hard to adjust, and eventually went crazy, hearing and seeing his dead companions and loved ones in his mind, torturing him. He escaped the X-Mansion and fled into the Morlock tunnels, where after a battle with the X-Men, he collapsed and flooded the Morlocks' home.[3]

The result being that the many including the X-Men believed for a significant time that they all drowned to death, including Mikhail, which would become yet another source of grief in addition to the rest of his family's death, for Colossus in the near future. This eventually led to Colossus having a fallout with Xavier.[4]

However Mikhail and the rest did not die, as Mikhail unbeknownst to the X-Men, used his power to open a new dimensional rift to a nasty world called the Hill. There, as time moved faster than on Earth, Mikhail trained and organized the next generation of Morlocks into Gene Nation, a terrorist group led by Marrow, who intended to return to our dimension and wreak havoc.[5] Later, Mikhail kidnapped Storm and tried to force her to be his consort. Storm escaped by threatening to kill Mikhail if he didn't use his power to return her to Earth.[6]

Mikhail next manipulated his sister Illyana into coming to the present from the past, when she was alive and had powers and magical abilities, saying that he could cure her of the Legacy Virus that was dormant inside her, and which would eventually kill her. In reality, however, Mikhail hoped to use Illyana's magically bolstered immune system to help cure his own infection. The process failed, and Illyana herself was infected with Legacy as a result, so in effect, Mikhail helped to kill his own sister.[7]

Mikhail's powers increased immensely, and he became quite mad. He gained the ability to animate objects, and believed that he could resurrect Illyana. However, he needed Colossus's artistic vision to give her a soul, so he kidnapped Peter (and Marrow, who was traveling with him at the time) and brought them to the Hill. Peter resisted Mikhail's attempts to persuade him and Mikhail finally lashed out at his brother. When Marrow attacked to save her friend, Mikhail unleashed a large burst, which caused him a lot of pain. Then this green ugly energy emerged from Mikhail's body, and Peter theorized that it was responsible for both his brother's increasing power and insanity. As Mikhail fought the creature, he opened a portal to send Peter and Sarah back. Peter grabbed for his brother and begged him to come back with them, and Mikhail made a supreme effort and followed them back. This severed his link to the energy creature, making him sane again, but cutting off his ability to teleport back to the creature's dimension.[8]

Mikhail recovered at the Mansion, where he discovered that he was part of the legendary Twelve. However, just as he was cleared to leave the med lab, he was captured by the Horseman Death and brought to Apocalypse. He no longer appeared to be infected with the Legacy Virus, but exactly how that happened is unknown. In the final battle with Apocalypse, Mikhail opened up another dimensional rift (something he shouldn't have been able to do any longer) and took the three remaining Horsemen with him to an unknown dimension.[9]

Mikhail reappeared on Earth in the company of Sinister, who was killing off the members of the extended Rasputin Family. It appeared that Mikhail was suffering from headaches, perhaps brought on by his proximity to his relatives. He managed to transport himself and Colossus to a reality of solid rock, and left Piotr there so he could be the lone Rasputin and absorb all of the dispersed portions of the psyche of his ancestor, Grigory Rasputin. However, the good aspects of some of his relatives appeared to hold influence in his mind, and Mikhail refused to finish assisting Sinister. He returned to the rock universe to save Piotr, and then exiled himself into an inter-dimensional void known as Kapalan, so that he would never die and Rasputin would never be reborn.[10]

Spatial Warping: He has the ability to manipulate subatomic matter and warp energy by altering their wavelengths to an unknown degree. He has used these energies to teleport through space, but at considerable risk. He is also able to fire energy blasts and affect another's energy-based powers, such as turning Iceman fully solid.

Like this? Let us know!
Retrieved from "https://marvel.fandom.com/wiki/Mikhail_Rasputin_(Earth-616)?oldid=5974908"
Community content is available under CC-BY-SA unless otherwise noted.