Spider-Man! Prowler! Come out to play-ay!

• It’s 13 miles from Washington Heights to Brooklyn, and Miles’ uncle Aaron is a wanted man.

• Racing the clock, out of web-fluid – if they ever make it home, it’ll be by dint of their wits and fists. 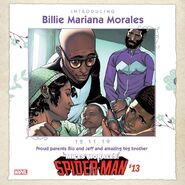 Retrieved from "https://marvel.fandom.com/wiki/Miles_Morales:_Spider-Man_Vol_1_13?oldid=5661313"
Community content is available under CC-BY-SA unless otherwise noted.