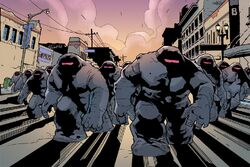 The Mindless Ones were created by Plokta as a way of slowing the expanding empires of rivals, virtually unstoppable engines of destruction. when a rival was deemed to be becoming too powerful, Plokta would let the Mindless Ones loose in the rival's realm, tying up the rival's resources trying to contain them.[2] When Dormammu was expanding his Dark Dimension by breaking down barriers between it and other realms, one of his new acquisitions contained Mindless Ones, who rampaged through the Dark Dimension until Dormammu managed to drive them back into a small region which he then enclosed with a magical shield to keep them out of his domain and fighting among themselves.[3]

Captain America and Sgt. Nick Fury joined forces to take out the hated Red Skull, who had stolen a mysterious secret weapon. But when the Nazi booty-triggered a gateway to the Dark Dimension, Cap and Fury found themselves face-to-face with with a group of Mindless ones.[4] ClanDestine ran into a group of Mindless Ones as well.[5]

During a fight between Dormammu and Doctor Strange, the Mindless Ones' mystical barrier was destroyed and they escaped. Strange then helped seal them back in their place, and in gratitude, Dormammu was bound to a promise to not invade Earth.[3]

While trying to stop Dormammu's invasion of Earth, the Avengers and the Defenders had to fight through an army of Mindless Ones as they progressed deeper into the Dark Dimension.[12]

Later, using a combined spell between Strange and Clea as well as the G'uranthic Guardian itself and the Mindless Ones, the two heroes succeeded, and the power stolen is then transferred into Clea.[13]

Thor battled a horde of Mindless Ones summoned by Loki.[14]

When the New Mutants are traveling through dimensions they wind up in the Dark Dimension and take out a group of Mindless Ones with ease.[15]

When Mindless Ones appear in New York, Strange suspects something is wrong in the Dark Dimension.[16] Doctor Strange, Clea, Umar, and Baron Mordo join to fight Dormammu. It is then revealed that Umar tricked Dormammu into ruling part of the Dark Dimension (over the Mindless Ones) while she and Baron Mordo rule everything else. Clea returns to Earth.[17]

The Secret Defenders were created by Doctor Strange to battle the armies of Dormammu.[19]

The Midas Corporation had a single Mindless One under its control.[20]

Magik and her armies accompanied Dormammu to Muspelheim. After surveying the destruction, they encountered the Archenemy itself, which slaughtered Magik's warriors and the Mindless Ones.[21]

A horde of Mindless Ones attacked Atlantis. The invasion was stopped by Namor, Namorita, and Vashti.[22]

Doctor Doom used a group of Mindless Ones to gain high levels of magical power. The Mindless Ones were used to attack the Thing of the Fantastic Four as part of a plan to test his durability.[23]

Spider-Man and other heroes battled hordes of Mindless Ones in Times Square, and returned them to their home, which prevented an invasion by Dormammu.[24]

The Defenders took on Nightmare, Dormammu, Umar, and their Mindless One minions in an unholy alliance.[25]

Deadpool and Bob, Agent of Hydra were confronted by a group of Mindless Ones. Rather than attack them, the Mindless Ones begin worshiping the duo, due to believing that the glow stick they held was some kind of mystical power.[26]

When the Mighty Avengers invaded Latveria to arrest Doctor Doom, he summoned a group of Mindless Ones to battle the heroes.[27]

When Plokta came to Earth, he decided to conquer the world while setting his base on a tower block in Birmingham, England. He used the mystical energy to create an army of Mindless Ones, but was stopped by MI13 lead by Captain Britain.[28]

The Shadow Initiative are sent in to retake Prison 42, in the Negative Zone. They faced Blastaar and an army of Mindless Ones.[31]

The Mindless Ones were also known as Neutron Slaves and used as slave labor to mine neutron stars. They rebelled and started creating a drug called "Krush". They joined the Black Hole Sons and it appeared that they were led by a being called The Mind, who was being held prisoner on the Upholder-class Nova Corps patrol cruiser known as "Resolute Duty".[1]

M and Strong Guy of X-Factor Investigations go in search of M's father Cartier St. Croix in the jungles of South America. They encountered Baron Mordo and a horde of Mindless Ones.[32]

Hulk was taken to the Dark Dimension by Umar. He was responsible for allowing 'the mindless ones' to attack her walls, and once Hulk realized that there were no innocents for him to hurt should he be let loose, he unleashed his full Worldbreaker levels of power and destroyed the planet.[33]

The Thunderbolts were on a mission to kill Doctor Strange, but were transported to the Dark Dimension instead. There they faced a group of Mindless Ones.[34]

A Mindless One was seen battling the Thing and Spider-Man in downtown New York City. During the brawl, the Mindless One pulled out the Ultimate Nullifier to use on them as he seemed to have developed self-awareness, but turned it around and shot himself in the head simply because he couldn't handle the very thought of sin.[35]

A Mindless One was sent against the Mighty Avengers by the Deathwalkers.[36]

Agent Phil Coulson's S.H.I.E.L.D. team took on the Avengers when they were turned into Mindless Ones.[citation needed]

When Galactus was transported to the mystic realms, it caused the fading of the boundaries between science and magic and an increasing instability of reality. Among the symptoms of that event were robotic Mindless Ones, rampaging through the Dark Dimension.[37]

Mindless Ones passed through a portal into the Four Freedoms Plaza and were sent back to the Dark Dimension by Dr. Strange.[38]

The past history of the Mindless Ones in this reality seemingly mirrored that of their Earth-616 counterparts. In recent history, they were unleashed upon the Earth dimension when the mystical barrier over Sanctum Sanctorum was smashed open after Thor took Clea to Asgard for punishment following her betrayal of Dr. Strange. However, the Mindless Ones were still trapped inside the Sanctum due to a binding spell that Strange cast about his home prior to his betrayal. Captain America and Mar-Vell briefly battled them when they came to the Sanctum to collect the Book of the Vishanti, the Eye and Orb of Agamotto. They were saved by Loki who told them that the items were moved, the Book to the Siege Perilous, and the Eye and Orb to Japan with Wong and Strange.[40]

Dormammu and his army of Mindless Ones attempted to break through the barrier between Earth and the Dark Dimension. He caught Doctor Strange, but lost in a battle between him and Doctor Strange, A-Bomb and Hulk. He instead hid in Doctor Strange's amulet and escaped to the real world but defeated by the heroes.[41] On Halloween, the Agents of S.M.A.S.H. encountered the Howling Commandos, who were sent there to arrest them. However, they had a change of plans when they ended up helping them prevent Dormammu from breaking into Earth's dimension and turning all of humanity into Mindless Ones.[42] Dormammu used Cloak to serve as a gateway for the Mindless Ones to invade Earth.[43] Due to the Infinity Gems, the Mindless Ones emerged from the portal with Dormammu. They were sent back to their dimension by Black Widow using the powers of the Infinity Gems.[44] The Mindless Ones later returned under the command of the Red Skull, who made a pact with Dormammu to defend himself from the Mad Titan Thanos.[45]

The Mindless Ones were soldiers of Dormammu. Just like him, they were powered by the despair of people.[46]

They were first seen when Dormammu sent a few of them to sow despair among the population of Earth.[47] When Dormammu learned that S.H.I.E.L.D. and the Avengers were working on a weapon capable of defeating him, he sent a large squadron of Mindless Ones to attack the Helicarrier. The first attack was repelled by the various superheroes guarding the craft, but Loki, who was working for Dormammu at the time, smuggled a second group inside using DISKs, and gave them a power boost by creating feelings of despair and disorder among the S.H.I.E.L.D. agents. When Loki's plan was exposed, however, everybody on board regained hope and the Mindless Ones lost most of their power. They were quickly defeated afterwards.[46]

After Dormammu was defeated, Loki stole his power and summoned a large army of Mindless Ones to help him in his final stand against the Avengers.[48]

Nextwave transported to this reality (Earth-63163)

Rorkannu was summoned by the Beyond Corporation as a way of 'renting' Mindless Ones. Rorkannu agreed for the paltry sum of a hundred Earth dollars and the Suicide Girls. After defeating his Mindless Ones, Rorkannu was beaten badly by The Captain and Monica Rambeau.[52]

The Super Hero Squad went to Dr. Strange for help, but Strange tricked them into battling the dread Dormammu and his Mindless Ones. It seemed a wayward fractal was stuck in the Eye of Agamotto. The team had to free Dr. Strange from the fractal's influence, defeat Dormammu, and rescue the city from an army of Mindless Ones.[53][54]

Whenever Dormammu conquered a new world, all of its inhabitants were transformed into Mindless Ones. Kaecilius and his followers didn't know this, as they sought to help Dormammu conquer Earth in a mistaken belief that they would gain immortality. Kaecilius and his remaining followers eventually learned the truth when they were forced into the Dark Dimension by Dormammu.[55]

The Mindless Ones possess:

Like this? Let us know!
Retrieved from "https://marvel.fandom.com/wiki/Mindless_Ones?oldid=6438714"
Community content is available under CC-BY-SA unless otherwise noted.