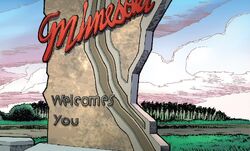 Minnesota was admitted to the United States of America on May 11, 1858.

When Black Bolt confronted Thanos in hopes of preventing the Mad Titan's invasion of Earth in the search of his son, he unleashed a powerful attack that triggered a Terrigen Bomb and destroyed Attilan in the process.[1] The resultant Terrigen Cloud released in New York City began to circumvent the globe, striking Minnesota and killing Humans of Inhuman descent (killing them to the little Inhuman DNA in them) while transforming Inhuman Jason.[2]

Like this? Let us know!
Retrieved from "https://marvel.fandom.com/wiki/Minnesota_(State)?oldid=5607520"
Community content is available under CC-BY-SA unless otherwise noted.