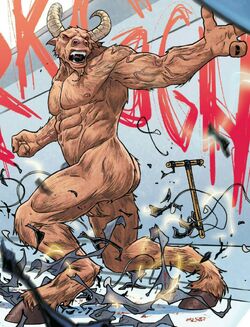 During the Hyborian Age, a man named Forbos had his prize bull transformed via magic into a Minotaur[citation needed][verification needed] by his jealous lovers Catrina. The two were also mystically connected. The Minotaur roamed the land causing havoc until it was slain by Conan the Barbarian.[1]

A Minotaur settled in the realm known as Olympus.[2]

Ares used the Ebony Blade lost by the Black Knight to try and rally the Centaurs, Satyrs and the Minotaurs in an attempt to conquer Olympus. Even with Amora the Enchantress by his side, Ares was defeated by Hercules and the Avengers.[2]

Ares later used Asterius as a guard in his base. Hercules joined in an invasion force to South America to assault a base of the Warhawks. When Hercules arrived, the Warhawks were gone, with only a Minotaur left, whom he slained.[3]

During World War, Captain America and Bucky make it inside the Red Skull's fortress, only to be captured. The Red Skull introduces them to his master plan, stealing monsters from Norse mythology and bringing them into our world. One of the creatures was a Norse version of the Minotaur.[4]

The Minotaurs appeared as the foot soldiers of Pluto alongside the Harpies.[5]

Like this? Let us know!
Retrieved from "https://marvel.fandom.com/wiki/Minotaurs?oldid=6509019"
Community content is available under CC-BY-SA unless otherwise noted.