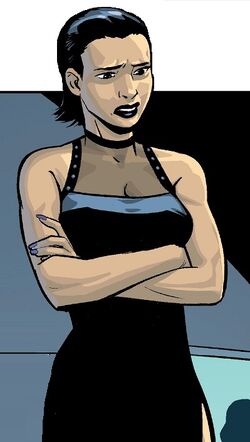 Miranda grew up in a Texas trailer park and was popular at school until her mutant powers manifested.[2] With no job skills and no money to support herself, she had to take a route to survive: sex work. She used her mutant abilities for her benefit, first on the streets and later when she was scouted by Madame Drache of the X-Ranch.[citation needed]

Soon the congregates and leaders of the mutant-hating Church of Humanity attacked the mutant brothel and burned it to the ground. The X-Men arrived and rescued her. Stacy joined the X-Men.[citation needed]

Stacy soon had to confront the Church members who eagerly sought her demise. During one of her first missions, Stacy was accidentally teleported by a member of the Church to their cathedral headquarters. The X-Men arrived and rescued her before any harm could be done by the Church and its leader the Supreme Pontiff.[citation needed]

Instead of using her mutant pheromones to ply an illicit trade, she made practical use of them, allowing the X-Men to gain ground on those who would do harm.[citation needed]

During her membership with the X-Men she tried to seduce members Archangel and Nightcrawler.[citation needed] After a few missions she quit the team, and left behind a video of herself jumping rope naked for Archangel.[3]

She lost her mutant powers due to M-Day and returned to the streets and sex work. Stacy was very depressed by losing her powers.[4]

She was recruited into Night Thrasher's newest incarnation of New Warriors. Her skin condition was cleared up and she was given a suit with built-in tentacles, presumably made of steel or a harder metal. She was apparently killed during a confrontation with S.H.I.E.L.D.'s Cape Killers.[5]

However, she appeared again at a club with Sugar Kane and the Ultimate Nullifier, alive and apparently repowered.[6]

She was later seen partying in Doomstadt, just before the Young Masters' attack.[7]

Stacy X attended the first meeting of the Mindfulness of Mutant Appearances, a support group set up by Domino and Nightcrawler for mutants unable to pass as normal humans. After fellow attendee Briquette took issue with the normal-looking Stacy X's presence, Stacy X revealed that her previous appearance as repowered was really her using makeup to imitate her former scaly appearance and that she had been seeking a reason to live since the loss of her powers, hoping that this group would be just that. Briquette apparently reconciled with and embraced Stacy X as the meeting closed.[8]

None, Stacy X is a depowered mutant.[citation needed]

Stacy was an expert fighter with some martial arts abilities,[2] capable of challenging even Wolverine, and defeat him while laughing.[citation needed]

While a member of the New Warriors, Miranda's costume was based on Slyde's frictionless suit and was equipped with enhanced technology, including Web-Shooters, Frog Springs, and energy whips.[2]

Like this? Let us know!
Retrieved from "https://marvel.fandom.com/wiki/Miranda_Leevald_(Earth-616)?oldid=6481268"
Community content is available under CC-BY-SA unless otherwise noted.