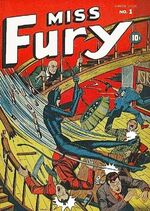 The inspiration for Hellcat, incarnations of the character have been part of Agents of Atlas, Amazing Heroes Swimsuit Special, Girl Comics, Masks, Protectors, The Saint and The Twelve.

Tarpé Mills' Miss Fury was revived in a four-issue mini-series published in 1991 by Adventure Comics (an imprint of Malibu Comics). In that series, we learned that the new Miss Fury (Marlene Hale) is the granddaughter of the original. Marlene's Aunt Stephanie also becomes a costumed adventurer, called The Black Fury. A battle between the two ends when both fall into a vat of chemicals.

The original Miss Fury appeared in 2008 when Marvel Comics published the first issue of the series The Twelve. She was depicted as part of an army of 1940s costumed heroes storming Berlin, Germany during the final days of World War II.