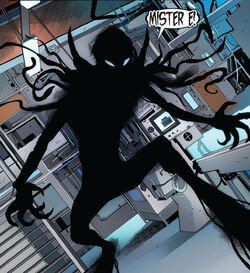 Mister E is the alias of a primordial proto-symbiote created by Knull as one of his early experiments at manipulating living abyss.[3][2]

Traveling to Earth, Mister E developed ambitions of godhood and took a NASA scientist named Louis Tuttle as its host, infecting the staff at Cape Canaveral with offshoots in order to turn them into shadow slaves. Mister E had its shadow slaves modify a space shuttle to emit negatron particles, intending to transform the sun into a black star - thus killing all life on Earth save those he planned to convert into an army of shadow slaves he would use to conquer the universe.

However, Mister E was opposed by Steven Coffin, who had become the host of the Uni-Power and transformed into Captain Universe. Wreathing the space shuttle in darkness, Mister E flew it towards the sun; battling Captain Universe when he boarded the solar shuttle. Mister E was seemingly killed when Captain Universe breeched the shuttle's hull and caused it to fly into the sun,[4] but somehow survived and returned to Earth.

Several months later, Mister E travelled to Ravencroft Institute and bonded to Alistair Smythe, using him to turn the staff into shadow slaves before creating an eclipse by channelling the power of the Shadow Realm back through the timestream. Encountering Spider-Man, Mister E recognized his symbiote as one of its brethren and enthusiastically greeted him, only to be confused when his "brother" attacked him. Incapacitated by the Black Knight, who attempted to interrogate it, Mister E cryptically remarked that while creation moves forward through time, uncreation moves backwards; before seemingly freeing itself and escaping into the shadows.[5] Disguising itself as Merlin, Mister E sent the shadow slave-controlled Ned Leeds to attack J. Jonah Jameson in order to lure Spider-Man away, then lured the Black Knight into a trap. Mister E attempted to trick the Black Knight into willingly surrendering the Ebony Blade to it, but he saw through its trick at the last moment. Taking the Ebony Blade by force,[6] Mister E impaled the Black Knight on his own sword and left - intending to destroy it so that it couldn't be used against Knull. Travelling to Knowhere, Mister E sought out the troll blacksmith Ulicia and requested her services, but they were attacked by her brother Ulik before she could begin.[7]

Mister E battled Ulik, who had been sent to get the Ebony Blade by Uatu the Watcher. Attacked by Spider-Man, Kang the Conquerer, Rocket Raccoon, and Captain Marvel, Mister E phased through their attacks until Captain Marvel used her powers to nullify its intangibility. Separated from Alistair Smythe, Mister E was sent to the Collector and subsequently imprisoned in his showroom.[3] Mister E pleaded with Knull to restore his full power, to which Knull acquiesced to doing -- enabling Mister E to escape and reclaim the Ebony Blade. Despite boasting that he was now invincible, Captain Marvel reclaimed the Ebony Blade and impaled Mister E with it before channeling her powers through it to destroy the proto-symbiote.[1]

Cunning, arrogant, and ambitious, Mister E sought to conquer the universe by turning the Earth's populace into shadow-slaves and believed itself unstoppable until its plan was thwarted by Captain Universe.[4] Mister E was fanatically loyal to Knull, and incredulous that the symbiote bonded to Spider-Man was not only subservient to its host but willing to oppose their master.[5] Mister E was able to convincingly impersonate Spencer Smythe and Merlin, and adapt its plans to account for unexpected developments like the discovery of the Ebony Blade.[6]

Comprised of living darkness, Mister E is capable of manifesting tendrils, wings, and claws; can become intangible, and can also merge to surfaces like a shadow.[5] It is capable of producing offshoots to take over other beings and turn them into subservient "shadow slaves" it can control.[4]

Like this? Let us know!
Retrieved from "https://marvel.fandom.com/wiki/Mister_E_(Klyntar)_(Earth-616)?oldid=6449612"
Community content is available under CC-BY-SA unless otherwise noted.