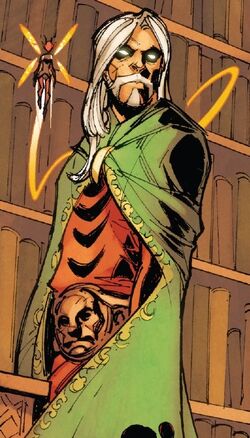 In the 6th Century, Modred was an apprentice magician under Gervasse and betrothed to Gervasse's daughter Janice. Modred was asked to become an apprentice by "Merlin". However, after hearing tales of madness, he declined. Thinking the power of the Darkhold could oppose the mad wizard, he went to the tower to claim it. He battled the Other (Chthon) until Janice came in. Rather than have her become corrupted, Modred gave himself up. Gervasse sealed Modred in a crypt hoping that future generations might be able to help him.

Modred was resurrected in modern times by Janet Lyton and Grant Whittaker.[1] He was startled by the changes to the world but managed to protect the couple when the Other came to claim him.[2]

Since then, he has fallen under and out of Chthon's control and encountered a great many heroes and villains. When Chthon's possession takes over, Modred is a very dangerous individual. One can never tell when he is going to change, as the Scarlet Witch found out as he helped her reach Wundagore to learn about her past, then attempted to offer her to Chthon.[3]

When Modred is in control of himself, he will help others fight evil, although his actions usually have his own interests at heart. For example, he helped Puck against the Brass Bishop thinking that he could find a method to retrieve his soul and end his possession.[4] He also briefly assisted Spider-Woman (Jessica Drew).

He also has attacked Captain Britain due to his association with Merlin. He seemed unaware that Brian served the true Merlyn and not the impostor Merlin he knew in the past.[5]

When the N'Garai came to Perfection, Modred brought the Darkhold Redeemers and was able to coerce a nearby Sabretooth to help. While Creed and the other Darkhold Redeemers battled the creatures, Modred examined the cairn. Thinking that Chthon might be on the other side, he saved a woman, then tossed her through the portal. The resulting screams convinced Modred that he should not try to use it. Sabretooth left unsure what had happened but pleased that he was able to slaughter a number of the N'Garai. The other Redeemers realized that Modred had simply used them for his own goals rather than trying to save the townspeople.[6]

Modred will seek revenge against anyone he feels has wronged him. This includes an almost irrational hatred of Doctor Strange when he became involved with the Darkhold Redeemers, as Modred felt that dealing with the Darkhold was his business alone. Modred briefly taught Jinx and also helped Kyllian.[7]

Sorcery: Before his encounter with the Darkhold, Modred was an apprentice sorcerer capable of only minor magic spells.

He was considered as a possible Sorcerer Supreme.[8]

Sorcery: Once the Darkhold had corrupted him and he had become connected with the Elder God Chthon, Modred's mystical abilities increased exponentially as he now has access to all of the spells contained within the Darkhold.

Modred has displayed the power of;

Divine Sources: On rare occasions, Modred has utilized spells that tap into the energies of mystical entities other than the Elder God Chthon, such as Cyttorak and Munnopor.

Like this? Let us know!
Retrieved from "https://marvel.fandom.com/wiki/Modred_(Earth-616)?oldid=5641818"
Community content is available under CC-BY-SA unless otherwise noted.