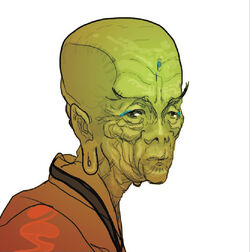 But of all the Astrans I was judged a criminal! Only I was sentenced to eternal exile! For I wanted to use my great power to conquer all!

Molyb was a would-be world conqueror from the planet Astra. While others from his home world used their natural magnetic abilities to form beautiful works of art, Molyb realized that his powers could also be used for conquest. Because of this, Molyb was deemed a criminal by his peers and exiled into our space. For years, he traveled the universe in search of a world rich in metallic resources which would be ripe for conquest. He eventually came to the planet Earth and publicly announced that he would take complete control of the planet unless the world's forces surrendered to him unconditionally within twenty-four hours.

Scientist Bruce Banner realized that his superhuman alter ego, the Hulk, was the only being on Earth powerful enough to stop the so-called "Metal Master." Using a Gamma Ray Projector, he prompted his transformation into the Hulk and fought against the alien invader. Though the Hulk evaded the Metal Master's initial attack, the alien managed to subdue him by battering him from behind with a large piece of steel. He then began traveling the globe displaying violent demonstrations of his power. One of his demonstrations included piercing the defenses of Russia and wreaking havoc with a Russian military apparatus. Afterwards, he returned to the United States where he threatened to destroy Washington, D.C.

Upon return to Astra, the Metal Master realized that he had been duped. He returned to Earth to analyze its metals, to learn if any of them were capable of failing his plans. There he met and fought Rom the Spaceknight. Mistaking Rom for a human, Metal Master attempted to seize control of his armor. Since Rom's armor was fused with his living cells this attempt failed and the Metal Master wandered away in shock of having apparently found a metal he couldn't control.[2]

At some point later in time, Molyb was sentenced by the Conclave of Seven Planets to live out his life in a deep space torture prison. There, he made acquaintances with fellow prisoners Absorbing Man, Blinky, Raava, and Black Bolt,[3] with whom he eventually tried to escape.[4]

Even though the initial attempt failed, Black Bolt's pet Lockjaw came to his aid,[5] giving the captives the chance to try again. When the prison's Jailer had the would-be escapees confront telepathic apparitions of their deceased loved ones,[6] Molyb became fixated by the ghost of his late husband, Meryn, to the point he tried to kill the Absoring Man when Creel struck against the wraith. Raava saw herself forced to stab Molyb in the back to neutralize him. However, due to his species' physiology, Molyb survived the injury. Once the Jailer was killed, the inmates escaped. Molyb bid his friends farewell and set out to atone for his misdeeds.[7]

Magnetokinesis: The Metal Master could mentally manipulate all metallic substances, shaping them into whatever form he desired. He could also telekinetically move metal substances from one location to another at various velocities and with varying degrees of force. His mastery over this power was so strong that he could move a heavy metallic object with enough force to render even the Hulk unconscious.

The Metal Master arrived on planet Earth using a space capsule, after having roamed the galaxies since his banishment from Astra. After being defeated by the Hulk, he departed away from Earth using the same rocket.

Like this? Let us know!
Retrieved from "https://marvel.fandom.com/wiki/Molyb_(Earth-616)?oldid=5693885"
Community content is available under CC-BY-SA unless otherwise noted.