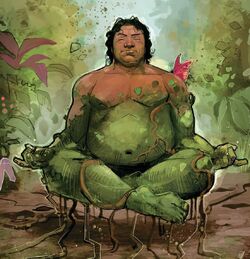 Mondo is a Samoan Mutant with the power to take on the properties of any organic or inorganic material he comes into contact.[1] He was cloned by the Black Tom Cassidy and the clone was sent to infiltrate Generation X.[2] He later joined the New Mutants and emigrated to the mutant nation of Krakoa. His powers later gave him a unique connection and unity with the living island.[3]

Mondo was once friends with Cordelia Frost, Emma Frost's younger sister.[4] In an attempt to make a bid for the position of White Queen of the Hellfire Club, Cordelia had Mondo contained and handed him over to the Inner Circle of the Hellfire Club. Cordelia's scheme backfired; Mondo was kidnapped by a third party representing the mysterious "Barrington", leaving her with nothing. Barrington was actually Black Tom Cassidy, who freed Mondo. Seeing an opportunity, Tom created a plant-life "clone" of Mondo to infiltrate Generation X for him. Cordelia went to Emma, headmistress of the Massachusetts Academy, for help and, soon after, "Mondo" was rescued by Generation X and subsequently accepted an invitation to join the school.[2]

Later, the real Mondo appeared alongside Black Tom and Juggernaut. Completely loyal to Black Tom, the real Mondo battled the members of Generation X. Generation X attempted to talk to Mondo into not fighting, but Mondo laughed at them, reminding them that he had never met them before. Generation X and their teachers were able to defeat their opponents, but the trio still managed to escape.[5]

He apparently survived the Decimation as he was seen alongside the other surviving members of Generation X in Cyclops' Million Mutant March in Washington D.C.[6] For the brief period of time during which Hydra took over the United States, Mondo appeared as an inhabitant of New Tian.[7]

Like many other mutants, Mondo joined the mutant nation of Krakoa following its foundation. He became a member of the New Mutants and went on a space mission to bring their teammate Cannonball back from the Shi'ar Empire.[3]

Matter Absorption: Mondo is capable of taking on the properties of any organic or inorganic material he comes into contact. When using his power, Mondo is able to grow in mass with an assumed proportionate growth in strength to superhuman levels. Mondo can absorb matter into his body, gaining the mass, appearance, and other properties of the matter in question. This change will remain until Mondo's body "digests" the organic matter, which is then disintegrated.

Like this? Let us know!
Retrieved from "https://marvel.fandom.com/wiki/Mondo_(Earth-616)?oldid=6551018"
Community content is available under CC-BY-SA unless otherwise noted.