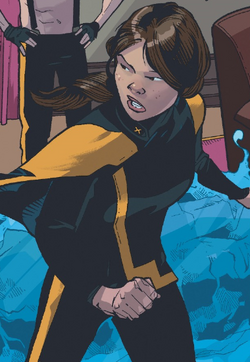 Moneta was a clerk of Department X, the mutant police force in the Age of X-Man reality.

Moneta, Psylocke, and Iceman were first seen attempting to arrest X-Man Bishop for "engaging in a forbidden relationship" with Marvel Girl and his "third breach of the guiding principles".[2] A brief skirmish broke out, but Psylocke and Iceman soon restrained Bishop while Moneta placed probed his memories for psychic evidence. Confirming guilt, Moneta placed a power inhibitor collar on him and deemed him "excommunicated". The group then removed all traces of Bishop's existence.[2]

Back at Department X's headquarters, Moneta had a cup of coffee which almost slipped out of her hand after Iceman zoomed by her on an ice slide as he made his way outside to their police van for a mission. Department X was tasked with capturing recurrent love criminals Luke and Nezumi Sen, two mutants who they had dealt with before.[3]

After being captured and iced up by Iceman, Moneta confirmed via Luke that the couple had indeed (graphically) violated the prohibition on love and relationships. Nezumi revealed to Blob while being loaded into the police van that she was pregnant, the first pregnancy that the group had encountered in their careers. Flummoxed by her revelation, Blob consulted with his teammates for confirmation of the pregnancy and what to do with their pregnant charge. Psylocke used her psychic powers to second Moneta's visions of the pairs' coupling. The group reacted with a mix of disbelief and, in Moneta's case, disgust. Eventually the group opted to unfreeze Nezumi upon their return to headquarters and decided what to do with her there. Moneta, hating the nature of their "crime", used derogatory words to describe the prisoners. Iceman told her to stop with the word retrograde as it was a slur.[3]

On a following day, Moneta and Department X participated in a controlled burn of a nearby woodland, in order to give the X-Men a catastrophe to manage. Moneta acted as lookout and audio coordinator for the group, standing on top of their police van.[1]

When team leader Blob had been absent for a few days, Moneta threatened to take over his duties, but the rest of the team ignored her. Furious, Moneta verbally lashed out and called them paper pushers only concerned with intimacy violations. She then left in a huff toward the basement to further interrogate Nezumi, with Northstar translating her Quebecois explanation to the group. Jubilee followed Moneta to the basement and discovered, to her horror, that Moneta had been abusing and torturing Nezumi over her disgust of "retrogrades". She and Nezumi argued briefly before Jubilee sent Moneta back upstairs.[1]

The full team was present the following day when Moneta accused Psylocke of pretending to wipe a recently arrested mutant's memory. Psylocke countered, stating that sometimes the memory erasure took awhile to stick. Moneta further accused Psylocke of working for the resistance and attempting to get prisoner out with his memories intact. Blob quickly came to Psylocke's defense, chastizing Moneta for her accusations and pulling rank to quell her disobedience. After being sent home by Blob, Moneta threatened to prove the resistance's existence. Jubilee then revealed to Blob the inhumane treatment of their prisoner Nezumi by Moneta and the continuing uncertainty of how to deal with Nezumi's pregnancy.[4]

Days later, Department X investigated a tip of a dissident teenage party at a ramshackle former library. The team soon discovered a group of teenagers, who Moneta insisted were in fact part of a "dangerous retrograde cult". Although the teenagers initially opted to flee, some members of their group rallied their cohorts to fight Department X, inspired by revolutionary Murshid En Sabah Nur. The trained officers quickly and reluctantly defeated the riled teens. Upon inquiry Moneta revealed that she had set up the encounter to prove the existence of the resistance. Furious at her deception, Blob fired her from the department and ordered her memory erased.[4]

Somehow Moneta managed to keep her position at Department X, albeit with an altered memory of the past few days. Teammate Northstar pondered how much of her memory had been taken in the purge and chastised Iceman for attempting to stir her memories. Later on that day, Moneta used her psychic tendrils to reboot her wiped memories.[5]

The X-Men later found her corpse at the Bright Disease, a local beatnik bar, and discovered she had been murdered. It was revealed to Nature Girl by bacteria living on Moneta's body that Murshid En Sabah Nur had stabbed a finger through Moneta's brain after she'd learned the truth about the universe's origins and Apocalypse's role.[6]

Jubilee came upon Moneta's corpse at some point as well while searching for Department X's police van to give to Nezumi and her newborn baby as a getaway vehicle. She hovered over Moneta's body only long enough to find the keys to the van, nonchalantly abandoning the body after.[7]

Although not shown on panel, it can be assumed that Moneta's body disappeared upon the collapse of Nate Grey's created reality.

Moneta appeared prejudiced against people who violated the laws concerning intimacy. She referred to them by the derogatory term "'grade", shortened from "retrograde".[3]

Psychic Fingers Moneta was a mutant who had a form of telepathy whereby she produced psychic tendrils that entered the subject's body via open cavities.[2][3]

Like this? Let us know!
Retrieved from "https://marvel.fandom.com/wiki/Moneta_(Age_of_X-Man)_(Earth-616)?oldid=5238153"
Community content is available under CC-BY-SA unless otherwise noted.