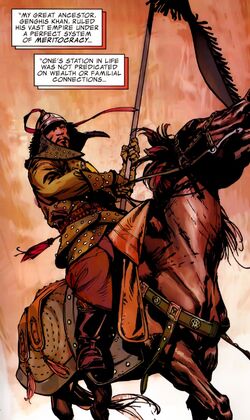 The Mongol Empire (Mongolian:Ikh Mongol Uls) was one of the largest contiguous land empire in history of Earth. It existed during the 12th and 14th century. It began in central Asia in a region that will be one day known as Mongolia. At it's peak the empire stretched from Europe to the Sea of Japan, extending northwards into Siberia, eastwards and southwards into India, China, Persia and westwards into Arabia. Although the Mongols were some of the most ruthless and fearless fighters, they lacked administrative skills. As a result, the kingdom had no unity and it was defeated by Ming builders.[citation needed]

Temujin was born on 1167, A.D. in a small Mongol tribe. When he was 13 years old, he succeeded his father as the tribe leader. He led his tribe against two neighbor tribes and obtained the title of "The Great Khan", later changing his name to Genghis Khan. He had vowed to rule over the entire world. In doing this, he first brought together the Mongolian tribes who were initially scattered. To begin on his mission, he set out for China, where he established the Mongol Empire.[citation needed]

In the 12th century, En Sabah Nur fought his way through a horde of Mongols. He finally arrives at a figure who sits on the ground waiting for him. The figure reveals himself to be Garbha-Hsien. He revealed to En Sabah Nur a giant Celestial Ship that he has never entered. En Sabah Nur is intrigued and stabs Saul so that he can get into the ship. Nur then walks into the ship and leaves Garbha-Hsien for dead.[1]

In 1206, A.D. he attempted to conquer China, he sought to obtain the Crown of Confucius that would make him absolute ruler of China. This attempt was thwarted by 1940s time traveler Tommy Tyme who tossed the crown down a supposedly bottomless pit before returning to his own time.[2]

Lao-Chung was one of the men who helped guild the Great Wall of China thousands of years ago and helped defend China from Mongolian invaders until his death. He was placed in a stone coffin near the Great Wall after his supposed death.[3]

Genghis Khan and at least one hundred of his soldiers were catapulted to Dodge City in 1871 due to a temporal anomaly. He quickly organized a camp with twenty tents, and began campaigning to obtain valuable resources such as land or food. He would find to other time-traveling generals, Alexander the Great and Napoleon Bonaparte, and begin a war with both of them. Due to the conflict, he would loose one of his commanders. He ordered to construct an arena in his camp so that his men and allies could fight for the honor. Some time-traveling heroes went to visit the Khan. They wanted to warn him of an alien threat, the Krozzar, which could only be fought with an alliance between the three Human generals. Genghis Khan was interested in this, and offered the newcomers a chance to prove their worth in the arena combat and, later, in a ceremonial hunt. During the hunt, Genghis Khan was attacked by seven of Napoleon's horsemen, but the attack was repealed by the heroes. This impressed The Khan enough to allow a meeting with Alexander and Napoleon.The three armies together and ready, led by the best military minds in history, were more than a match for Alzzan's alien forces: The Krozzar never managed to capture the needed route, not even after fifteen hours of non-stop battle. However, during this time, the super-heroes sneaked into the Krozzar base and defused their only bomb.Eventually, the heroes managed to solve the time-crisis. Genghis Khan and all of his men returned home.[4]

In the 13th century, a ship carrying the crew of Sir John O'Dare are en route to join King Richard in the Holy Lands to fight in the Crusades. However the ill fated crew is stricken with the plague and pull ashore in a region ruled by the Mongol Empire. Their party is spotted by a group of Mongols led by a Frank warrior named El Alemain. El Aleman's second in command Tenga Khan suggests that they attack the Frankish knights who have come to shore, but El Alemain refuses to attack them. Tenga Khan wishes to see El Alemain killed as he covets his leader's sword the Saracen, which El Alemain won during the battle of El Bakar as it is believed that it makes the wielder invincible and the amulet given to him by his mother before her death. Tenga Khan then convinces the other warriors to attack the Frankish warriors anyway. But when they learn that the warriors are suffering from the plague the Mongols are forced to pull back. El Alemain then challenges Tenga Khan for his unauthorized attack, but Tenga has planned for this, having his loyal minions ready to shoot El Alemain with an arrow during the fight. However when the assassin fires his arrow, he strikes Tenga Khan instead during the battle. Seeing this dishonor, O'Dare and his men attack the Mongol and both parties are wiped out, all except El Alemain. Holding the dying John O'Dare in his arms, El Alemain learns from the dying warrior -- who recognizes El Alemain's necklace -- tells El Alemain that they are brothers and asks him to join King Richard in the crusades, wearing his armor into battle. El Alemain agrees to do so, and after burying his long lost brother, he puts on the deceased warriors armor, and so the Crusader is born.[5]

The Atlas Foundation regards itself as a perpetuation of the ancient Mongol Empire, with each leader a descendant of and rightful successor to Genghis Khan. As he grows old, each Khan seeks a successor.[6]

The Vikings built permanent settlements in America after the Mongol Empire took control of Europe and North Africa.[7]

Retrieved from "https://marvel.fandom.com/wiki/Mongol_Empire?oldid=5746912"
Community content is available under CC-BY-SA unless otherwise noted.