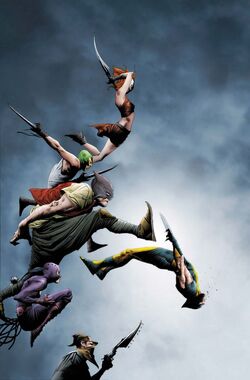 During his long life, Wolverine met and fell in-love with many women and unknown to him, he also fathered a number of children. Those children were found though the years by another one of Logan's son, Daken.

Daken then gave them to an evil organization who wanted revenge on Wolverine for what he did to them in the past: the Red Right Hand. On Daken’s advice, the Red Right Hand trained them in order to use them as weapons against Logan, but knowing perfectly that they wouldn't stand a chance against him. Their training over, the Red Right Hand named them The Mongrels.[1].

The Mongrels became a group of mercenaries whose main mission was to make Wolverine’s life a living hell. The plan was to cause as much suffering imaginable, and that included the torture of his friends and family. The Mongrels were led by Gunhawk and the rest of the team includes Shadowstalker, Fire Knives, Saw Fist and Cannon Foot.

One of the team’s targets was Wolverine's girlfriend at the time, Melita Garner. They found her working in the San Francisco Post building.[2] When they found and attacked Melita, they were shocked to find her with a Skrull sonic disruptor, which she fired at the team. Melita escaped from the Mongrels with the help of the mutant shape shifter Mystique. The team returned to report their failure to the The Red Right Hand. They then decided to proceed to their next target in the nation of Madripoor.[2]

After they arrived in Madripoor, The Mongrels searched the city to find the Princess Bar. They entered the bar and massacred the bouncers and staff, but Tyger Tiger intervened when Gunhawk tried to open a certain door. Gunhawk told Tyger "Logan is in hell," and burned the room down, which was filled with mementos and possessions that Wolverine had accumulated over his long lifetime.[3]

After escaping from Hell, Wolverine invaded the Red Right Hand's base, where he was confronted by the Mongrels.[4] Despite what they did to his friends, he gave each one of them a chance to surrender peacefully but the Mongrels attacked him on sight and tried to kill him. As a result Logan killed most of them,[4] [5] [6] while the others killed themselves [7] and after defeating the leader of the Mongrels, Gunhawk, Logan confronted the members of the Red Right Hand.[6]

To his surprise, the members of the Red Right Hand already killed themselves, leaving Wolverine with only a message: the Mongrels were his children, this revelation and the fact that he killed his own children devastated Logan.[1] Wolverine then drags the bodies of his slain children to the grave of their mothers and buries them both together.[8]

It's unknown if The Mongrels were aware that Daken was their half-brother and Logan their father, as the Red Right Hand and Daken only told them what was necessary to make them fight and die against their own father.[1]

Like this? Let us know!
Retrieved from "https://marvel.fandom.com/wiki/Mongrels_(Earth-616)?oldid=5548830"
Community content is available under CC-BY-SA unless otherwise noted.