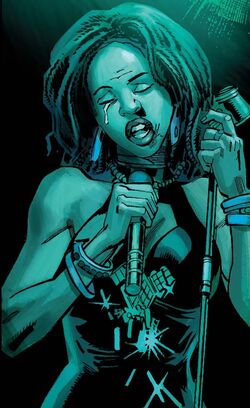 Monica Lynne grew up in Georgia with her parents and her sister Angela. One of her ancestors was lynched by the Klan enforcer Soul-Strangler.[1]

She moved to New York, where she met the Black Panther. T'Challa saved Lynne from a violent racist plot of the Sons of the Serpent[2] and the two began a long relationship. For a time, Monica Lynne lived in Wakanda with the prince at his royal palace. T'Challa visited and stayed with Monica at her parent's home in Georgia when they were investigating her sister's death. During the same visit, she met the journalist Kevin Trublood.[3]

At one point, Monica and T'Challa were engaged to be married, but he called off the engagement without explaining why.[4]

Monica was drawn back into T'Challa's life when his enemy Achebe kidnapped her to interrupt a state dinner in T'Challa's honor.[5] Circumstances led to Monica accompanying T'Challa back to Wakanda, where she was unceremoniously ejected from a Talon fighter by the jealous Dora Milaje, Nakia.[6]

Monica was rescued in the jungle by Erik Killmonger, once again becoming a pawn in Killmonger's rivalry with T'Challa for several months.[7]

More recently, Monica Lynne was shown singing a sad love song at a sold-out concert in Washington D.C., clearly distraught over the fact T'Challa was getting married to another woman despite the fact that she had, in fact, ended their relationship.[8]

Monica would eventually succumb to terminal cancer the following years after T'Challa and Ororo's wedding. The king would attempt to save her life by gathering one of the Heart-Shaped Herb's that gives the panther kings their strength and vitality from the highest peak of a mountain top, all so he could give her one last parting gift before the funeral march.[9]

Like this? Let us know!
Retrieved from "https://marvel.fandom.com/wiki/Monica_Lynne_(Earth-616)?oldid=6349869"
Community content is available under CC-BY-SA unless otherwise noted.