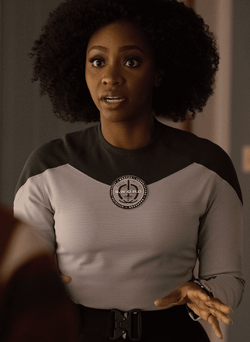 Monica Rambeau was the daughter of Air Force pilot Maria Rambeau. Her mother's close friend, Carol Danvers, had essentially become part of the Rambeau family and spent a lot of time with both Maria and Monica, with Monica considering her to be her "Auntie Carol". When Carol was reported to have died in a plane crash in 1989, Monica couldn't believe it and kept some of Carol's belongings safe, including her leather jacket, due to the belief that she would be able to return them to Carol at some point.

In 1995, Carol, missing most of her memory, turned up at the Rambeau family home with Nick Fury. Carol then explained to Monica and her mother that she was being targeted by alien Skrulls and that she had gained superhuman powers, both of which fascinated Monica. The collection of items that Monica had kept were given back to Carol in an attempt to jog her memory. The Rambeau home was soon infiltrated by Skrulls, with Monica encountering Norex, a Skrull disguised as her mother, who was keeping her busy while the Skrull leader, Talos, spoke with Carol and the others.

Monica was mostly kept out of the discussing taking place between the adults. However, when Danvers was planning on leaving the planet to search for the Skrull refugee ship in orbit, Monica encouraged her mother to join Carol and the others on their mission. Carol approached Monica before they left, asking for her help in choosing new colors for her Starforce Uniform, with the red, blue, and yellow of the Air Force shirt that Monica was wearing being chosen.

Monica was looked after by her grandparents during the mission and welcomed them home when it was successful. Monica played with Talos' daughter during their celebratory dinner and even suggested that the rescued Skrulls could remain safe on Earth with them. Carol did not believe that the Skrulls would be safe on Earth and that she would return to space to find them a new home, to which Monica replied that she would one day meet Carol out in space. Nick Fury suggested that Monica would need superpowers of her own to achieve this, to which Monica suggested she might build her own spaceship. Monica shared an emotional farewell with Carol and watched in amazement as she left Earth.[1]

Over the next few decades, Monica dedicated her life to pursue journeying into space. She became an agent of S.W.O.R.D., an organization founded by Maria, where she piloted missions into space.[3]

Sometime later, Maria got cancer. In 2018, Monica was accompanying her mother at a hospital after a surgery she had to remove the cancer. The surgery was seemingly a success, but at this same time, Thanos used the Infinity Stones and killed off half of the universe, including Monica.

Five years later, Monica was resurrected through the efforts of the Avengers and reappeared in the hospital, where she learned Maria had succumbed to her cancer two years after Monica's disappearance.[3]

Three weeks later, Monica returned to the S.W.O.R.D. headquarters and learned she was grounded from space missions. Her acting director, Tyler Hayward, assigned her a missing persons case in Westview, New Jersey. Meeting up with Jimmy Woo, she learned that the citizens of the town had mysteriously vanished, and that no one connected to them even knew of their existence, much less Westview's. Monica discovered a barrier around the town, but was sucked into the barrier when she approached it.[3]

Monica ended up in a sitcom-based reality, now mind-controlled by the Avenger Wanda Maximoff to take on the role of a woman named "Geraldine." She attended the Westview planning committee meeting, headed by "Dottie Jones," another resident of Westview mind-controlled by Wanda. She met Wanda at the committee and sympathized with her about feeling out of place in Westview. Later that day during the committee's talent show fundraiser, Wanda and her husband Vision accidentally used "Geraldine" for their big finale, much to her confusion.[2]

The next day, "Geraldine" arrived at Wanda's home, claiming that she needed a bucket because all the pipes in her ceiling burst. She began to tell a story about work, unaware that Wanda was pregnant and that her powers were getting out of control. Just as "Geraldine" discovered the crib in Wanda's nursery, Wanda started going into labor, forcing "Geraldine" to help her deliver her first baby, Tommy. Just as Vision arrived back home, Wanda also gave birth to another baby, Billy. "Geraldine" was excited about Wanda's twins, causing Wanda to wistfully recall her twin brother, Pietro. "Geraldine" recalled that Pietro was killed by Ultron, which greatly upset Wanda, who now noticed the S.W.O.R.D. logo on Geraldine's necklace. Seeing her as a threat, Wanda expelled "Geraldine" out of the sitcom reality.[4] Waking up in the real world, Monica realized that the sitcom reality was all Wanda's doing.[3]

After going through a number of medical procedures overnight, Monica wanted another shot at getting through to Wanda. Hayward, who had set up a S.W.O.R.D. operating base outside Westview, saw Wanda as a threat and wanted to eliminate her instead. Monica banded together with Agent Woo and astrophysicist Darcy Lewis in order to find a way back into what Darcy called, "the Hex." Monica came up with the idea to send a decade-appropriate drone into the Hex, in order for it to pass through the barrier unaltered and for them to communicate with Wanda. However, unbeknownst to Monica, Hayward weaponized the drone and ordered for it to eliminate Wanda on the spot. This merely angered Wanda, who exited the Hex and threatened S.W.O.R.D. to leave her family alone or face her power.[5]

Furious, Monica confronted Hayward for ordering a strike on Wanda. Hayward admitted he had no sympathy for superheroes and noted Monica's closeness with Carol Danvers as a bias. Hayward had Monica, Darcy, and Woo removed from the base, but the trio snuck back in to retrieve information. Hacking Hayward's personal files, Darcy discovered that Hayward's ulterior motive was to retrieve the Vision's body, even if that meant killing Wanda. Darcy also discovered that having gone through the Hex' barrier twice has altered Monica's DNA and she advised not going through again. At that point, Monica got a message from a S.W.O.R.D. ally of her's who found a way for her to breach the barrier.[6]

The next day, Monica and Woo met up with Major Goodner, who had prepared a specialized vehicle that was designed to penetrate the Hex. Monica geared up and drove the vehicle straight into the Hex, however, it failed to breach the barrier. Exiting the vehicle, which had now been transformed into half of a regular truck, Monica rushed straight into the Hex, despite Woo calling for her not to. Monica felt strong pushback as she went through the Hex, but hearing the voices of her mother, Auntie Carol, and Nick Fury pushed her to fight through. Coming out the other side of the barrier, Monica could see the energy permeating all the objects within Wanda's world.

Monica rushed to Wanda's residence, where Wanda immediately met her with hostility. Monica tried to talk her down, but Wanda used her powers to lift Monica into the air and throw her down. Miraculously, Monica wasn't hurt upon landing and seemed to merely have absorbed the force of the drop. At this point, Wanda's neighbor Agnes jumped in and told Monica to go away, as she redirected Wanda to her house. Monica attempted to follow them by going through Agnes' basement door, where she only discovered weird vines radiating with energy. She was then met by a man who accused her of being a snooper.[7]

The man kept Monica locked in his messy bedroom, as battles between Wanda and Agnes, Vision and Hayward's Vision raged outside. The man prevented her from escaping using his superspeed. She discovered that the man's name was Ralph Bohner and he was being controlled by Agnes through a necklace that Monica saw was radiating with energy. Monica incapacitated him, removed the necklace, and went to aid Wanda. She arrived in town square as soon as Hayward, who had breached the barrier with his S.W.O.R.D agents, was about to shoot Tommy and Billy. She jumped in front of the boys in order to take the bullets. Surprisingly, Monica's body transformed into energy and merely absorbed the bullets, which impressed the two boys, who also had superpowers of their own.

After Wanda defeated Agnes and took down the Hex, she approached Monica. Monica, unlike the rest of the townspeople, didn't hate Wanda. She told Wanda she sympathized and would've brought back her mom if she had Wanda's powers too. She watched as Wanda flew away, before the authorities arrived. Monica greeted Woo, who was managing the clean-up of the battle, but she was immediately called into the town's theater for a briefing. However, the agent who called her revealed herself to be a Skrull. She informed Monica that a friend of her mother's heard she was grounded and wanted to meet with her in outer space.[8]

Rambeau is skilled in hand-to-hand combat, as she was able to take down multiple S.W.O.R.D. agents during her infiltration with Jimmy Woo and Darcy Lewis. She was also able to pin down Ralph Bohner before liberating him from Agatha Harkness' control.[5][8]

Like this? Let us know!
Retrieved from "https://marvel.fandom.com/wiki/Monica_Rambeau_(Earth-199999)?oldid=6544423"
Community content is available under CC-BY-SA unless otherwise noted.