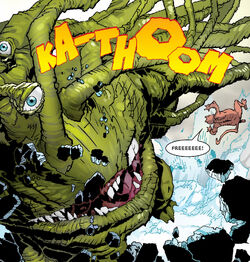 Not much is known about the creature that would be known as Monster King. At some point, he was appointed monarch of the new Monster Nation that settled in Staten Island and chose Bellus as his Lord Chamberlain.[1]

Monster King was capable of tearing Deadpool in two with his appendages.[1]

Like this? Let us know!
Retrieved from "https://marvel.fandom.com/wiki/Monster_King_(Earth-616)?oldid=5870829"
Community content is available under CC-BY-SA unless otherwise noted.