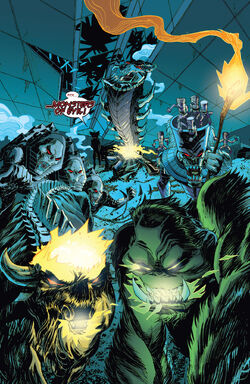 Origin
Ancient and powerful monsters that Daimon Hellstrom and the D.O.A. possessed with demons.

Even before I possessed them with demons, each and every one of these creatures was ancient and powerful in ways you can't even imagine.

Before being possessed by demons, each one of the Monsters of Evil were ancient and powerful monsters. Gragoa was once feared as a god in what is now the Mole Man's kingdom. Lord Tiki was an ancient idol brought to life by a botched fertility ritual. The Worm was an alien that came to Earth to study humanity, which she did by committing a string of cattle mutilations. Once the local farmers discovered she was the culprit, they destroyed her spaceship and the lab inside it. Skunk Ape was a human scientist whose evolutionary research backfired, transforming him into a giant simian. The Sphinx was accidentally brought forward in time to the present from its native Ancient Egypt thanks to its own riddles and curses. At some point, each one of them was captured by Daimon Hellstrom and the D.O.A. and possessed them with demons, inducting them into their Monsters of Evil.

When confronted by Agent Venom, Daimon Hellstrom possessed his foe's symbiote with a demon to turn him into one of his Monsters of Evil. Venom took control of the demon and fled to Katherine Kiernan's apartment. She took him to her friend, Reggie, who tried to exorcise the demon from him. The demon, which wanted to be exorcised, couldn't break free because his vessel was dragging him back down, and explained that it was forbidden to possess those who bore the Hell-Mark. Reggie then advised Agent Venom to find whoever it was who did this to him.

Agent Venom ambushed and attacked Daimon Hellstrom and some D.O.A. members at a zoo in Bronx. Hellstrom then unleashed the Monsters of Evil on Venom, but he fought through them to attack Hellstrom only to be flung by Gragoa across the zoo, into the reptile house. Hellstrom ordered the monsters to hunt him down, either to join them or to have his demon liberated by his death. Venom ambushed and attacked the Sphinx, and its screams summoned the other monsters. Venom controlled them to attack Hellstrom and after brutally beating him, Venom ordered them to leave, warning that if they became a threat to humans, he'd hunt them down. The Monsters of Evil obeyed and vanished into the woods.[1]

After Venom and Mania fought Crossbones when they were trying to make contact with Mephisto, the demon summoned the Monsters of Evil using a portal on Master Mayhem's chest to serve Mania, who was in possesion of the symbiote's hell-mark, and she commanded them to defeat the D.O.A.. In the end, Mephisto sent the Monsters of Evil back home with some D.O.A. members as snacks for their trip.[2]

When attacked by Carnage, Andi summoned the Monsters of Evil to come to her aid. However, they proved no match for Carnage's primordial symbiote, who easily tore them to shreds.[3]

Retrieved from "https://marvel.fandom.com/wiki/Monsters_of_Evil_(Earth-616)?oldid=5304623"
Community content is available under CC-BY-SA unless otherwise noted.