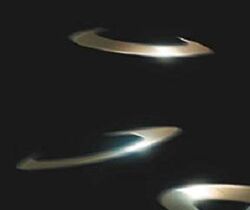 Crescent darts are the primary weapons of choice for the masked vigilante known as Moon Knight. A concealable weapon which is made of Adamantium commonly [1], they function similarly to that of Shuriken. Moon Knight maintains a supply of these darts clipped to the outside of his belt on either side of the buckle. Although they are primarily used for throwing, the darts are also useful for close-quarter combat. The visual design of the darts (inspired by the Egyptian God of Vengeance, Khonshu), are intended to reflect the shape of the Gibbous moon. Midway through his career, Moon Knight upgraded his arsenal and began using a different variety of throwing weapons. [2] These supplemental darts were given to him by the Priests of Khonshu, and were based on designs originally developed by Hawkeye (Clint Barton). [3] During one of the darker periods in Marc Spector's life, he even used one of his darts to remove the face of his most notorious adversary, Bushman, an attack that resulted in Bushman's death. [4]

Like this? Let us know!
Retrieved from "https://marvel.fandom.com/wiki/Moon_Knight%27s_Crescent_Darts?oldid=6485470"
Community content is available under CC-BY-SA unless otherwise noted.