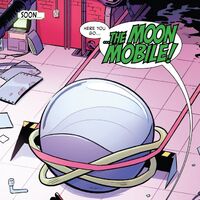 While working on a fourth grade science project about Earth's Moon, Lunella Lafayette set up a Translation Helmet communication array on the roof of the highest point of Manhattan's Lower East Side. This allowed her to receive a deep space distress call from an alien girl named Illa who claimed to have been separated from her father and was lost and alone.

Lunella then took what she'd learned from the failure of the Moon Rocket and combined it with her newfound understanding of the Omni-Wave Projector, which she used to power her latest interstellar craft dubbed the Moon Mobile, and manipulated space-time to pinpoint the origin of the signal.

Crash landing on the moon where they believed Illa to be located, Moon Girl and Devil Dinosaur used Environment Suits to explore the lunar surface while attempting to locate the missing child. Unable to lock on the source of the communique, Illa then revealed herself as the entire moon, happily proclaiming she had waited a lifetime for someone to find her.[1]

Unfortunately the crash landing had caused the Omni-Wave Projector to malfunction and Lunella needed quiet time to think about how to fix it before she could concentrate on Illa's problems. Unable to focus, she took off back to Earth after helping rid Illa of a flea infestation; however, the planetary forces emitted by Illa's displeasure over their departure, without finding a way for her to see Ego whose orbit she remained in and thus wasn't actually lost, overloaded the Kree technology and cast the Moon Mobile into a parallel universe.[2]

Retrieved from "https://marvel.fandom.com/wiki/Moon_Mobile?oldid=5267854"
Community content is available under CC-BY-SA unless otherwise noted.