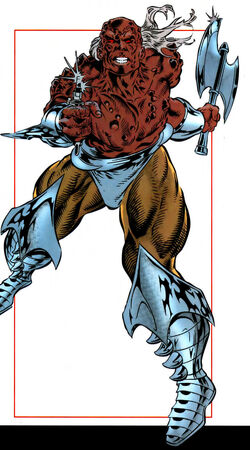 Morg served as a herald of Galactus after Galactus' previous herald, Nova, was expelled for sparing suitable planets to sate his hunger. Subsequently, prior to consuming his latest planet, Galactus was confronted by Morg; a court executioner. In the presence of the world-devourer, Morg showed no fear; instead exhibiting a respectful defiance. Impressed with Morg's demeanor and wary after losing several heralds to attacks of conscience, Galactus decided to employ this most brutal and remorseless specimen as his latest herald. Morg gladly accepted the task of being Galactus' herald. As a weapon, Morg wields a double-edged battle axe — previously used by him in his executioner duties.[1]

Two former heralds, Silver Surfer and Firelord, learned about Morg after discovering that Nova had left Galactus. They expressed their concerns to Galactus about Morg's low morals but were dismissed. Morg battled and easily defeated them both.[2]

Seeking reinforcements, Silver Surfer and Firelord recruited the rest of Galactus' former heralds: Nova, Terrax and Air-Walker, whom they had to unearth from his grave and reassemble. During this time, Morg discovered the Well of Life, a powerful pool akin to the Fountain of Youth on a planet to which he had lead Galactus. He immersed himself in the pool, which enhanced Morg's powers exponentially before he returned to his master and the planet was destroyed.[3]

The assembled heralds confronted Morg together and were outmatched. In the battle, Air-Walker was severely damaged again and Morg killed Nova by blasting her in the back when he was thought to have been beaten. Galactus was not pleased with this as he had not ordered her death. Galactus removed the power cosmic that he had imbued in Morg, leaving him with only the power he'd gained from the pool he'd discovered. In his weakened state, Morg was killed by Terrax. To repay Galactus the inconvenience of losing his herald, both Firelord and Air Walker volunteered to stay with him.[4]

Months later, Galactus resurrected Morg, imbuing him with the Power Cosmic once more but removing the increased effects of the Well of Life, and offered him a second chance. Morg then sought his missing axe. Morg went off in search of Terrax to exact vengeance upon him, but during their battle they were ambushed by robots working for the villain Tyrant and were taken captive.[5]

Morg, along with fellow captives Silver Surfer, Terrax, Gladiator, Beta Ray Bill, Jack of Hearts and Ganymede fought back against Tyrant and were easily defeated until the appearance of Galactus disrupted the battle. Morg had been incapacitated in the battle, like all those involved, save for the Surfer. Tyrant stated that everyone there could go free, except for Morg, for no other reason than to spite the world devourer.[6]

Tyrant imprisoned Morg and continued to siphon off his Power Cosmic and store it into his orbs. Eventually Morg escaped and went back to his master Galactus and served as herald again for a brief time. In a battle between Galactus and Tyrant, Morg found the Ultimate Nullifier and used it to melt most of Tyrant's body then betrayed both masters by cutting off his own arm while he tried to escape the final nullification blast (Tyrant's drone attached itself to the Nullifier and Morg's arm thus not allowing Morg to separate himself from the Nullifier). His escape failed and the Nullifier exploded, destroying Galactus' ship and all aboard. Morg and Tyrant were presumed dead.[7]

Morg's body was eventually retrieved and was used as a battery by Annihilus to access the Power Cosmic. Morg was confirmed dead as Annihilus failed to retrieve the Power Cosmic from his corpse, as it had dissipated after death.[8]

Morg possessed various superhuman attributes after being imbued with the Power Cosmic by Galactus. Morg later increased his powers, temporarily, through immersion in the Well of Life. However, after Galactus siphoned away the enhancements caused by the Well, Morg's powers were decreased to their normal levels.

He was stated to have an "Universal" threat level by the Nova Corps when herald of Galactus. Since, he remained a category 1 threat due his amplified Power Cosmic and his sociopathic nature.[9]

Power Cosmic: Like all of Galactus' heralds, Morg was imbued with a fraction of Galactus' power. He could manipulate great amounds of cosmic energy for various effects including projecting powerful blasts of concussive force or heat, manipulating the molecular structure of most forms of matter, and augmenting his own physical attributes.

Morg was a skilled hand to hand combatant, though he typically relied on his powers while in combat situations

Cosmic Axe: Morg possessed a double bladed cosmic axe that he used in combat. The ax and handle combined were approximately 7' in length and were incredibly durable. Morg typically used the ax to focus the Power Cosmic in the form of destructive blasts, some of which were capable of ripping through the hull of Galactus' ship.

He was stated to have a "sociopathic nature" by the Nova Corps.[9]

Like this? Let us know!
Retrieved from "https://marvel.fandom.com/wiki/Morg_(Earth-616)?oldid=5839900"
Community content is available under CC-BY-SA unless otherwise noted.